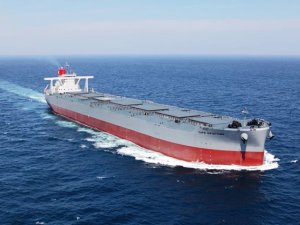 Featuring a length of 300 meters and a width of 50 meters, the unit is equipped with a scrubber on the funnel to remove sulfur oxides from the gas discharged from the engine.

The Capesize would be employed in iron ore and coal transport for JFE Steel Corporation under a long term consecutive voyage charter contract, according to K Line.

The Liberia-flagged ship is compliant with the Common Structural Rules for Bulk Carrier (CSR-BC) for bulk cargo ships, and the main institution is equipped with an electronically controlled engine with enhanced anti-corrosion measures, in order to save energy, the company installed a Weather Adapted Duct (WAD) in front of the propeller and Hybrid Fin behind the propeller.