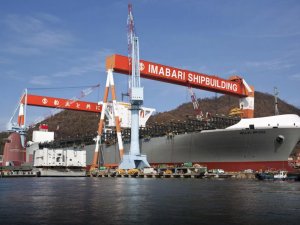 Japan’s Imabari Group has recently brought into full commission the country’s first new dock for ship construction in 17 years, and is set to implement a further stage in its business development strategy by taking control of Minaminippon Shipbuilding.

According to ‘The Motorship’, the No3 drydock at Imabari’s Marugame complex provides a new showcase for the industry on the Seto Inland Sea, bolstering the unlisted organisation’s standing as Japan’s leading shipbuilder. Furthermore, the group’s network within the region will be expanded to 10 shipyards with the planned assimilation of Minaminippon, due to take effect at the start of April 2018.

While shiprepair is undertaken at a number of its facilities, and also provides one of Minaminippon’s income streams, newbuild production is Imabari’s predominant activity. Its 2016 output of around 4m gross tons of merchant shipping placed the group within the top five in the international shipbuilding league, headed by South Korean rivals. It is also reportedly Japan’s second largest consumer of steel products after automotive giant Toyota Motor.

The new drydock at Marugame extends the company’s scope to ultra-large containerships of 20,000TEU, and other major tonnage such as VLCCs, very large ore carriers (VLOCs), and LNG tankers, and confers the capability to produce multiple units in quick succession.

The spur for the ¥40bn (USD 365m) project was success in sealing a long run of orders for boxships in the 20,000 teu category, to be deployed by Mitsui OSK Lines (MOL) and Evergreen Marine Corporation’s Evergreen Line. The new dock has cut its teeth on the second MOL vessel, which was floated during last September’s inauguration ceremony.

Container liner operators, in particular, tend to contract new tonnage at individual yards in batches or long series, striving for both design commonality and capital cost savings. With takeovers and collaboration gaining momentum in the deepsea boxship sector, leading to fewer players and to combined forces wielding greater ‘muscle’, multiple ordering of 10-20 ships is increasingly the way, raising the stakes for shipbuilders.

In fact, Japan is central to the current phase of restructuring, whereby the respective container shipping businesses of MOL, NYK Line and K Line are being integrated, bringing services under the Ocean Network Express (ONE) brand from 1 April 2018 onwards. Two 20,000 teu newbuilds from Imabari will form part of the ONE fleet.

The No3 building dock at Marugame measures 610m in length, by 80m width and 11.7m depth, flanked by a wide assembly area with two movable sheds. The dock and apron are served by three goliath-type gantry cranes, each spanning 182m and offering a maximum lift capacity of 1,330t. By pairing two gantries, an entire, pre-outfitted block of 2,000t can be positioned in the dock. This massive wherewithal is supplemented by two 50t jib cranes.

The dock’s dimensions, craneage and associated logistics support the semi-tandem construction method for the largest ships, to realise productivity gains that translate into shorter build timeframes and lower unit costs. The system allows construction of a complete hull to proceed concurrently to the adjacent assembly of the stern section of the subsequent newbuild.

The new facility is contiguous to the existing yard site, having been built on reclaimed land sold off by the Marugame City Land Development Corporation. Ground was broken in early 2015 by a civil engineering consortium comprised of Rinkai Construction, Obayashi Corporation, and Toyo Construction. Marugame is located on the north coast of Shikoku, due east of Imabari city, and close to the Seto Ohashi Bridge, which links Shikoku with Japan’s main island of Honshu across the Inland Sea.

The project underscores the scale of corporate ambition and long-term mindedness of the privately-owned organisation, with the Higaki family at the helm. The same culture was graphically demonstrated 25 years ago when it purchased a 600,000m2 site at Saijo, near Imabari city, for the construction of a new shipyard. Starting with the opening of a hull block factory in 1995, the Saijo yard’s emergence as a vital, highly efficient element in the Imabari production system took final form with the creation of a 420m x 89m building dock yard, from which the first vessel was floated-out in 2000.

With Marugame’s No3 dock now fully on-line, Imabari has the capability to turn out a total of 15-16 ‘mega’ containerships per annum using its Marugame, Saijo and Hiroshima yards. This could potentially include 10 vessels in the 20,000 teu class, with 6.5 ships per year coming from Marugame and 3.5 from Saijo. Imabari is planning to quickly ramp up output to realise the potential, and anticipates production of 13 of the 20,000 teu size from Marugame and Saijo by the end of 2019.

Three years ago, MOL entered into long-term charter contracts with Imabari’s shipowning affiliate Shoei Kisen Kaisha for two 20,000 teu newbuilds to be constructed by Imabari Shipbuilding. The first of the pair, MOL Truth, was delivered from the Saijo yard in October 2017, and assumed the mantle as the largest container vessel built in Japan. The second ship has provided the debut project for Marugame’s new dock.

MOL’s new generation, four of which were also entrusted to Samsung Heavy Industries in South Korea, has main dimensions of 400m x 58.5m. Imabari’s current workload includes 11 further vessels of similar size and capacity scheduled to be completed this year and in 2019 to the account of Shoei Kisen Kaisha, for charter to Evergreen of Taiwan.

Evergreen’s contractual links with Imabari through Shoei have also entailed five 14,000 teu boxships commissioned in 2017, and a nascent 10-ship series of 2,800 teu intra-regional traders due in 2018 and 2019. At the time of writing, Imabari was among the international contenders for a series of 11,000 teu newbuilds sought by the influential Taiwanese carrier.

While the 20,000 teu class brings Japanese shipbuilding to a new stage in its technological and competitive development, an earlier milestone was Imabari’s 2015 handover of K Line’s 14,000 teu Millau Bridge, incorporating energy-saving technologies resulting in approximately 35% less fuel consumption per teu-mile compared with 8,000 teu vessels. The design also featured a foredeck cover to reduce wind pressure resistance. At the time, Millau Bridge was the largest cellular container liner delivered from Japan and was built at the group’s Hiroshima yard.

While its South Korean counterparts have come to command major shares of the market for higher added-value types of tonnage, Japanese shipbuilders have proved especially adept at continually refining designs and hoisting productivity in the more populous categories. This is especially apparent in bulk carrier construction, and Imabari is among the contributors to Japan’s prolific output.

Illustrative of its position, the 100th example of the IS Bari-Star class of 38,000dwt geared bulker was handed over by Imabari last May, only seven years after the delivery of the first vessel. The design’s attraction stems from its combination of price competitiveness, fuel efficiency, and suitability for steel products and logs besides the gamut of bulk commodities.

Investment at Marugame is ongoing, whereby the commitment to internal R&D, and ultimately to product quality and productivity, is to be reinforced by building new test tanks on the north side of the site. The scheme is targeted for completion in 2020 and is understood to feature two model tanks. One of these will be equipped with a wave-making device for assessing hull resistance and performance in a range of sea conditions.

Complementing expenditure on new and upgraded facilities, acquisition of companies and yards has been, and remains, a constant factor in the Imabari Group’s evolution. A raft of names has been absorbed over the years, including Imai, Nishi, Iwagi, Koyo Dockyard, Shin Yamamoto, Hashihama, Shin Kasado, and Watanabe. More recently, in 2015, the Tsuneishi subsidiary Tadotsu shipyard was brought into the fold. Having operations concentrated in the Inland Sea region helps the group to hold down costs.

While compatriots have seen a reduction in turnover from shipbuilding, Imabari has continued to seek further growth and consolidation. New expression has been given to this strategy by the anticipated takeover of Minaminippon Shipbuilding, located at Usuki, on Kyushu Island, at the western end of the Inland Sea. The main stockholders are MOL and Mitsui Engineering & Shipbuilding (MES). It is anticipated that Minaminippon’s integration into the Imabari model will yield benefits in terms of production efficiencies and global competitiveness.

Although unflagging in its efforts to ensure long-term resilience and competitiveness, a worry for Imabari, as for other Japanese shipbuilders, is the perceived level of both direct and indirect state support afforded yards in China and South Korea, creating market distortions.

This news is a total 1687 time has been read
Tags: Imabari Shipbuilding Envisions Growth Amid Consolidation