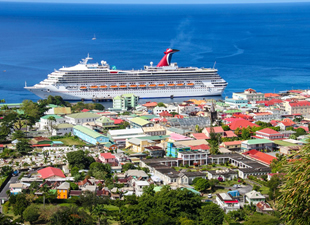 The island nation of Dominica welcomed Carnival Triumph, owned and operated by Carnival Cruise Lines (CCL), last week as it made its inaugural call, arriving at the Roseau Cruise Ship Berth.

With a passenger capacity of 2,754 and crew size of 1,100, Carnival Triumph sailed to the “Nature Island” from Grenada. This is the Triumph’s only scheduled call to Dominica during the 2014/2015 cruise season.

Upon leaving Dominica the ship sailed to St. Maarten. Carnival Cruise Lines began calling on Dominica in 1989, but stopped in 2010. This is the third CCL vessel to call on the island since 2010.

Cruise tourism is a major component of Dominica’s growing tourism sector. During the 2013/2014 cruise season, there 188 calls which translated into 282,404 passengers.

This news is a total 2015 time has been read
Tags: Carnival Cruise Lines, Carnival Triumph, Dominica, image of the day