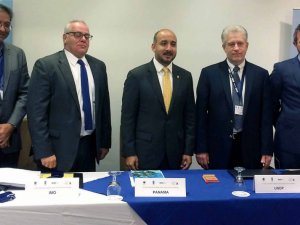 A project promoting the implementation of an international treaty stemming the transfer of potentially invasive species in ships’ ballast water has been concluded at a meeting of stakeholders from governments, the shipping industry and UN bodies, the Inte

The final meeting of the GloBallast Global Project Task Force (GPTF) was held in Panama City, Panama, from March 16 to 17.

The IMO has been carrying out the GloBallast Partnerships Programme in collaboration with the Global Environment Facility (GEF) and the United Nations Development Programme (UNDP).

Launched in 2007 after an initial four-year phase, the program has been assisting developing countries to reduce the transfer of harmful aquatic organisms and pathogens in ships’ ballast water and implement the IMO Ballast Water Management (BWM) Convention, scheduled to enter into force in September 2017.

According to the IMO, the final meeting highlighted the legacy elements of the GloBallast project, which are expected to be sustained by its main stakeholders following the formal closure of the project in June 2017.

Specific examples include GloBallast training packages to support the capacity-building needs of countries implementing the BWM Convention. The regular BWM R&D Fora, which promoted the development of innovative ballast water treatment technologies, are also expected to continue after the project’s closure.

Within the project, regional task forces were formed in 12 developing sub-regions and regional strategies and action plans on BWM were developed, involving more than 100 countries. To date, six of these action plans have been adopted through the regional cooperating institutions.

GloBallast has also facilitated capacity building at the national level, helping to establish national task forces and assisting with drafting and adopting the national legislation in 80% of its lead partnering countries. This has supported many of these countries to ratify the BWM Convention, the IMO said.

The meeting in Panama also promoted the key role of the project’s lead partnering countries within their respective regions to sustain regional BWM implementation, and explored funding mechanisms that could finance future capacity-building needs, the IMO further said.

“Through GloBallast, governments, industry and other stakeholders have acted to further improve the environmental and socio-economic sustainability of shipping and worked to reduce its negative impact on marine ecosystems,” Stefan Micallef, Director of IMO’s Marine Environment Division, said.

“The GEF-UNDP-IMO GloBallast Programme has played a key catalytic role in preparing countries and the shipping industry for the implementation of the BWM Convention, which will reduce the significant ecological and economic damage, lost livelihoods and human health impacts often caused by invasive species,” Andrew Hudson, Head of the Water & Ocean Governance Programme at UNDP, commented.

The GPTF meeting was hosted by the Panama Maritime Authority and attended by 43 participants.

This news is a total 1016 time has been read
Tags: IMO: Project Addressing Marine Bio-Invasions Completes