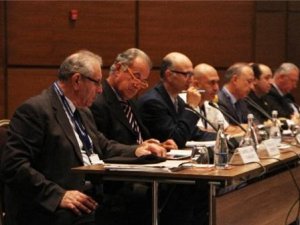 'Migrant issues in the Mediterranean' conference was held on 5th of September with the participation of International Maritime Organization (IMO) committee presidents and representatives of 69 countries.

IMO, IALA and Mediterranean countries' coast guard command representatives attended the conference as speakers which is leaded by Turkish Chamber of Shipping Chairman Metin Kalkavan. After the conference, all the attendants' questions answered about migrants.

"As long as war continues, migrant issue can not be solved"

Turkish Chamber of Shipping Chairman Metin Kalkavan stated, "Migrant issues can not be solved as long as war continues. It is not their decision to be in that kind of a situation. This is not an issue of Turkey, Greece or Malta. This is a world wide problem".

"It is so important that world leaders should step into action"

Metin kalkavan continued his speech, "Migration is an ongoing act progressing for centuries.  This time it was so saddening and it touches your heart. The world should step into action. It is also important that how United Nations react this. People who are silent about that heartbreaking incident should give up their decisions. This is a world wide problem".