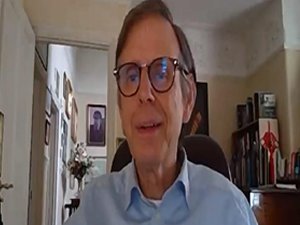 The IMO’s target of reducing shipping’s carbon emissions by at least 50% by mid-century can easily be achieved and even surpassed, according to shipping economist and non-executive President of Clarkson Research, Martin Stopford.

In a presentation given to a Marintec webinar at the end of last week – The Fourth Revolution at Sea – Stopford explained how the IMO’s target, which many suspect may be impossible to meet, can be achieved with changes to business models and some smart thinking.

Stopford’s wide-ranging presentation was a follow-up to his white paper, “Coronavirus, climate change and smart shipping”, published by Seatrade Maritime in May. His analysis then included the likely impact of three pandemic outcomes, ranging from slight to moderate to severe, on sea trade, shipping demand and greenhouse gas emissions.

In his latest work, Stopford said that making existing vessels more efficient by systematic retrofitting should be a priority while naval architects should focus on a new generation of low emission ship designs based on diesel engines. Gas and hybrid vessels should continue to be developed in markets where they are commercially viable, he said, and these designs will pave the way for all-electric ships when zero-carbon fuels become available.

“We must focus on doing the things we know we can do, whilst preparing to do the things we can only do, if we get the fuels to do them”, he declared, noting that green fuels will be in heavy demand across the industrial spectrum. Supplies may be limited and expensive, he said, questioning whether shipping would qualify for green fuel supplies.

New ships should feature not only structural design enhancements, but also improved performance with process control through Control Area Networks, Stopford said, widely adopted in other transport modes and in industrial automation applications. Ships should slow down, and a new generation of “bigger, small ships” should be developed. Although big ships reduce emissions per unit of cargo carried, the savings diminish with size. Furthermore, small ships can call at a wider range of regional ports, thereby reducing demand for high-carbon land transport.

Stopford also suggested that the shipping industry should work closely with its customers to identify ways in which less cargo could be transported. This is likely anyway in the oil trades, he has said previously, as demand for crude oil and products declines over time. But there are also implications for dry bulk cargo movements. Transporting vast quantities of raw materials halfway round the world to be processed is not a very efficient use of shipping capacity.