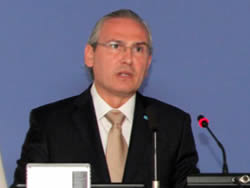 The Twenty-First Session of the IMSO Assembly of Parties was held in London from 12 to 15 July 2010.

The Twenty-First Session of the IMSO Assembly of Parties was held in London from 12 to 15 July 2010.

The International Mobile Satellite Organization (IMSO) today announced the outcome of the Twenty-First Session of the IMSO Assembly of Parties, held in London from 12 to 15 July 2010, under the Chairmanship of His Excellency Mr Gilberto Arias, the Ambassador of Panama to London. The Assembly was attended by representatives from sixty Governments as well as by observers from eight international organizations.

Captain Esteban Pacha-Vicente, the IMSO Director General, today spoke of his pride and pleasure at the important decisions which were taken by the Assembly, and paid tribute to the spirit of compromise and collaboration which prevailed among all participants, resulting in decisions which will enhance the Organization"s role in ensuring vital distress, safety and security services.

The IMSO Assembly meets every two years to consider and review the purposes, general policy and long term objectives of the Organization in relation to its oversight of the GMDSS activities of Inmarsat and in relation of IMSO"s performance as LRIT Coordinator.

In addition to reviewing many constituent instruments and policy documents, the major deliberations of the Assembly related to:

? The reappointment of the Director General for a further four year term;

? A review of the status of GMDSS and the significant future workplan of the Directorate to promote all aspects of the use of maritime mobile-satellite communications in the GMDSS;

? A review of the status of LRIT, including the integration and audit of LRIT Data Centres, signature of LRIT Services Agreements, financial issues including LRIT charging formula. Work related to LRIT will continue including regular reporting to the IMO Maritime Safety Committee;

? Financial matters including a adoption of a new IMSO Business Plan and Budget Arrangements, endorsement of the IMSO Budgets for 2009 and 2010, review of the audited financial statements for 2008 and 2009, the decision to move to International Financial Reporting Standards in the future and financial planning for the next two years

? The participation of the Directorate in the activities of other intergovernmental meetings, in particular the United Nations, IMO, ITU and ICAO, noting in particular that the IMSO Director General has been appointed as Founder Commisioner of the UN Broadband Commission for Digital Development and in that role IMSO would promote global communications for safety sea, land and air transport, in remote areas and in case of natural disasters.

The Assembly also elected the following thirty-two Member States to comprise the IMSO Advisory Committee, which will meet twice a year over the next two years until the next regular session of the Assembly, to advise the Director General in fulfilling the mandate given by the Assembly:

Mr Eric Berder of France was appointed Chairman of the newly constituted Advisory Committee. The next session of the Advisory Committee will be held in Argentina in early October 2010. Thereafter it will meet twice a year.

The next session of the Assembly will be in 2012. 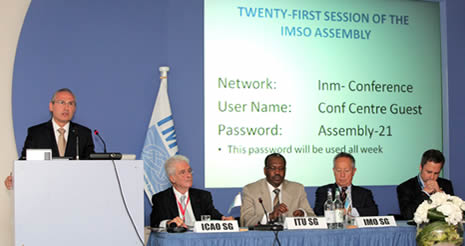 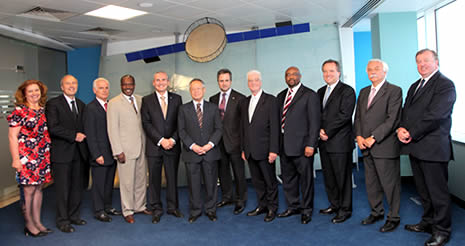 This news is a total 3832 time has been read