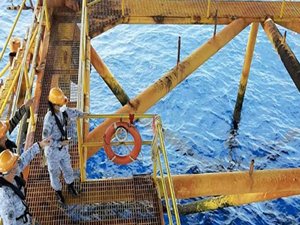 Last week, in a departure from his previous stance, Philippine President Rodrigo Duterte expressed unqualified support for the 2016 ruling of the Permanent Court of Arbitration in the Hague.

The court's landmark decision found that China's sweeping "nine dash line" sovereignty claim to the South China Sea is broadly invalid. The Philippines was the plaintiff in the case and the ruling favors its maritime interests, but Duterte's administration has not previously emphasized its significance.

"We must remain mindful of our obligations and commitment to the Charter of the United Nations and as amplified by the 1982 Manila Declaration on the Peaceful Settlement of International Disputes. The Philippines affirms that commitment in the South China Sea in accordance with UNCLOS and the 2016 arbitral award," Duterte said. "The award is now part of international law, beyond compromise and beyond the reach of passing governments to dilute, diminish or abandon."

Duterte has repeatedly attempted to diminish the importance of the award. In 2016, he said that he would "set it aside" in favor of pursuing bilateral talks with Beijing. In 2019, he said that he had discussed an agreement with Chinese President Xi Jinping on joint offshore energy development - contingent on the Philippines giving up the arbitral award and associated EEZ claims in disputed waters. "They want to explore [disputed waters] and if there is something, 'We would be gracious enough to give you 60 percent.' That is the promise of Xi Jinping," Duterte told reporters. "Exclusive economic zone is part of the arbitral ruling which we will ignore to come up with an economic activity [Chinese E&P]."

However, his stance has evolved: in July, Duterte's Department of Foreign Affairs formally recognized the arbitral ruling for the first time since the Philippines won the case four years ago. In last week's speech, Duterte projected his strongest support for the ruling yet, promising that the Philippines will "firmly reject attempts to undermine it."

"We welcome the increasing number of states that have come in support of the award and what it stands for - the triumph of reason over rashness, of law over disorder, of amity over ambition. This - as it should - is the majesty of the law," he said.

Duterte also called for peace in the region, warning of the loss of life and destruction that would come if the world's superpowers were to face off in the Western Pacific. "I therefore call on the stakeholders in the South China Sea . . . if we cannot be friends as yet, then in God’s name, let us not hate each other too much," he said.

Duterte's change of heart comes as his military is investigating the possibility of establishing an outpost on two abandoned offshore platforms near Reed Bank, where Chinese seismic survey vessels have established a regular presence within the Philippine EEZ.

The two defunct platforms belong to the Nido and Matinloc fields, which ceased production last November and have been shut down. The existing infrastructure would provide the Philippine Navy with a strategic outpost off the northwest coast of Palawan, less than 100 nm from Reed Bank.

This news is a total 2731 time has been read
Tags: In Reversal, Duterte Backs South China Sea Arbitral Ruling