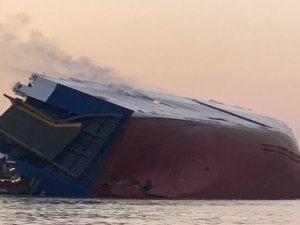 The NTSB’s issued a Marine Accident Report today detailing the board’s investigation into the September 8, 2019 capsizing of the roll-on/roll-off vehicle carrier as it transited outbound through St. Simons Sound near Brunswick, Georgia.

Inaccurate stability calculations caused the capsizing of vehicle carrier Golden Ray with more 4,100 vehicles loaded inside, resulting in a total loss of the vessel and all of its cargo, the National Transportation Safety Board said Tuesday.

The report identified the chief officer’s error entering ballast quantities into the stability calculation. The NTSB’s issued a Marine Accident Report today detailing the board’s investigation into the September 8, 2019 capsizing of the roll-on/roll-off vehicle carrier as it transited outbound through St.

Simons Sound near Brunswick, Georgia. All 23 crewmembers and one pilot on board were rescued, including four engineering crew who were trapped in the vessel for nearly 40 hours.

Two crewmembers sustained serious injuries. Damages from the incident have been estimated at $200 million. The Golden Ray sustained significant damage due to fire, flooding and saltwater corrosion and was declared a total loss estimated at $62.5 million. An estimated $142 million worth of cargo, including more than 4,100 vehicles, was also lost.

Wreck removal operations in Georgia’s St. Simons Sound continue to this day. According to the NTSB, the 656-foot-long Golden Ray began to heel rapidly to port during a 68?degree turn to starboard less than 40 minutes after leaving port.

Despite attempts by the pilot and crew to counter the heel, the rate of turn to starboard increased, and the vessel reached a heel of 60 degrees to port in under a minute before it grounded outside of the channel.

The NTSB determined the probable cause of the capsizing to be the chief officer’s error entering ballast quantities into the stability calculation program, which led to his incorrect determination of the vessel’s stability and resulted in the Golden Ray having an insufficient righting arm to counteract the forces developed during a turn while transiting outbound from the Port of Brunswick through St. Simons Sound.

Contributing to the accident was the vessel operator’s lack of effective procedures in their safety management system for verifying stability calculations. The operator was G-Marine Service Co. of Busan, South Korea.

The NTSB also concluded the Golden Ray did not meet international stability standards at departure and possessed less stability than the chief officer calculated. According to the NTSB, after the vessel capsized, open watertight doors allowed flooding into the vessel, which blocked the primary egress from the engine room, where four crewmembers were trapped.

Two watertight doors had been left open for almost two hours before the accident. No one on the bridge ensured that the doors were closed before departing the port.

“The circumstances of this accident show that even when transiting in protected waters, watertight integrity is critical to the safety of the vessel and its crew,” the report said.

“It is essential that the operator ensure that crews verify that all watertight doors are closed in accordance with safety management system procedures.” The NTSB has issued two safety recommendations to G-Marine Service Co. Ltd.

The first recommends the company revise its safety management system to establish procedures for verifying stability calculations and implement audit procedures to ensure their vessels meet stability requirements before leaving the port.

The second recommends the company revise its safety management system audit process to verify crew adherence to the Arrival/Departure Checklist regarding the closure of watertight doors.

The VB-10000 has been used throughout the operation, which has involved cutting the wreck into eight separate sections for lifting and removal by barge.