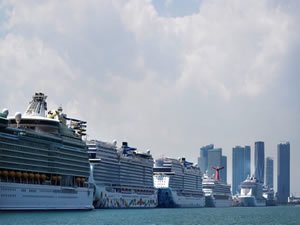 The Norwegian cruise line Hurtigruten Group was ready to show the world that ships could be made safe from Covid-19.

It outfitted its newest vessel, the MS Roald Amundsen, with a suite of prevention measures for cruises among the glaciers, fjords and polar bear breeding grounds of Svalbard Island, far above the Arctic Circle.

And yet sometime after the Amundsen left Tromso, a port in northern Norway flanked by snow-capped mountains, on July 17, the virus found its way on board. Eventually, 71 passengers and crew members from two back-to-back cruises to Svalbard were diagnosed with the novel coronavirus, outbreaks that were traced back to the ship. The Amundsen, named for the Norwegian man who became the first explorer to reach the South Pole, had become one of the worst Covid super-spreader events to strike Norway, according to a tabulation compiled by researchers at the London School of Hygiene and Tropical Medicine.

Norwegian health officials hastened to deal with the outbreaks; they quarantined hundreds of passengers who went home to dozens of towns across the country. In the end, no additional community infections were traced to the Amundsen, said Petter Elstrom, who oversees Covid-19 tracing at the Institute for Public Health, Norway’s equivalent of the U.S. Centers for Disease Control and Prevention.

The Amundsen outbreaks occurred just as a second wave of infections was sweeping the country, Elstrom said. “It was quite calm with few outbreaks before this was discovered, and afterwards it has only increased.”

For the U.S., the world’s biggest cruise market with 14 million embarkations in 2019, the Amundsen’s story shows how an outbreak on a single, ill-fated ship can have far-reaching effects and tax public health resources. With major cruise lines now pushing to sail from U.S. ports again as soon as March, they pose an early test for the incoming Biden administration’s stated commitment to health and science.

Most Covid-era cruises in Europe and parts of Asia have gone much better. There’ve been more than 200 cruises since the spring that saw no outbreaks of the virus. Moreover, an investigation that Hurtigruten commissioned into the Amundsen’s outbreak found a number of flaws in its preparations and response. An official criminal investigation is under way.

In the U.S., where the CDC continues to recommend against taking cruises, the agency has nonetheless agreed in principle to allow ships to resume sailing from American ports – assuming that they undertake several Covid-19 preventative measures that were designed by industry consultants. Those steps include reducing capacity, shutting down food buffets, improving ventilation and testing crew and passengers for coronavirus. The agency will have to review and approve each ship’s plans before they’re cleared to sail.

The bad news: That list of steps is quite similar to the practices that Norway’s Hurtigruten promised on the Amundsen.

“Implementing these proposed measures may help decrease but will not eliminate the risk of transmission and outbreaks,” Rebecca Brewster, a health scientist at the consulting firm Cardno ChemRisk said by email. Brewster co-authored a study called “Lessons learned for Covid-19 in the cruise ship industry.”

After a series of deadly shipboard outbreaks earlier this year, the CDC had banned cruising from U.S. ports in March. But the agency lifted that “no-sail” order in October – after cruise lines lobbied the White House extensively. Top CDC experts wanted to extend the ban, but were overruled by the White House Coronavirus Task Force, led by Vice President Mike Pence.

President-elect Joe Biden and his coronavirus team have not released their positions on the cruise industry. Nonetheless, Biden has been outspoken about basing coronavirus policies on science – meaning the CDC will likely have more clout in deciding when cruises will be safe again than it ever had with Trump, said Amesh Adalja, senior scholar at the Johns Hopkins Center for Health Security.

“The CDC under Trump has been put in the back seat and muzzled,” said Adalja, who advised Royal Caribbean Cruises Ltd. on coronavirus outbreaks earlier this year. “I think the CDC will go back to the position it’s always occupied in past presidential administrations, where it acts autonomously based on science.”

The safest route may be to wait until Covid-19 vaccines are available for passengers and crew, Adalja said.

But the three biggest cruise lines — Carnival Corp., Royal Caribbean and Norwegian Cruise Line Holdings Ltd. — have said they plan to resume cruising in March. All three declined to address questions about waiting for a readily available vaccine.

Asked about Carnival’s preparations, spokesman Roger Frizzell said: “We have begun the process with the CDC to identify ships that are expected to sail in U.S. waters.”

All the cruise lines have committed to “implement multiple layers of protocols informed by the latest scientific and medical knowledge” by then, according to a statement from Kelly Craighead, president of the industry lobbying group Cruise Lines International Association, or CLIA. The statement was published by the CDC.

Of course, that’s what Hurtigruten tried to do. The Amundsen, a sleek, 140-meter black, red and white ship that was christened in 2019, was meant to showcase safe-sailing during a pandemic.

The company limited the ship’s ticket sales to half-capacity to give passengers room to spread out. Most ship workers had been tested for Covid before boarding. And someone always seemed to be around to separate passengers who got too close or to urge the use of hand sanitizer stations that had been installed all over the ship. “There was incredibly good infection control on board,” said Line Miriam Haugan, a passenger on the Amundsen’s second cruise to Svalbard, which left Tromso on July 24. “We were stopped and moved if we were too close to each other.”

Such practices have met with good results in Europe and Asia overall, industry advocates note. “The success of these initial sailings demonstrate that a return to cruising is possible with enhanced measures in place and that the new protocols are working as designed — to mitigate the risk of Covid-19 among passengers, crew and destinations,” CLIA’s U.S. spokeswoman, Bari Golin-Blaugrund, said by email.

There have been exceptions beyond the Amundsen. In November, seven passengers and two crew members aboard the SeaDream1 tested positive for Covid as the Norwegian luxury ship sailed the Caribbean. The disease struck even though all passengers had tested negative for Covid-19 twice before joining the cruise and adhered to strict measures aboard.

“I think this is one of the safest places in the world to be right now,” the ship’s captain, Torbjorn Lund, said before the voyage began. SeaDream Yacht Club had to cancel all cruises for the rest of the winter season. (SeaDream Yacht Club didn’t respond to requests for comment.)

Then, on Dec. 9, Royal Caribbean abruptly ended a four-day cruise to nowhere in Asia after it reported that an 83-year-old passenger on the Quantum of the Seas tested positive. The diagnosis ended up being a false alarm; the man tested negative on shore, according to the Singapore Ministry of Health. But the scare was disruptive. All 1,680 passengers were confined to their cabins as the Quantum made an emergency return to Singapore. Passengers had to undergo testing before being allowed to leave the cruise terminal. Royal Caribbean canceled a subsequent, four-day cruise on the Quantum scheduled to begin Dec. 10.

The Amundsen’s case was more devastating. As the ship returned to Tromso July 24 after the first seven-day cruise to Svalbard, three crew members were down with what seemed like a cold. Within hours, the ship headed back to Svalbard with new passengers aboard, and more crew members began to get sick.

By the time the second cruise ended, one passenger from the previous cruise had tested positive for Covid back home. Within days, 29 passengers from the two cruises had brought coronavirus back to at least 14 towns in Norway, including places that hadn’t had cases in months.

The outbreak became a national scandal in Norway, where Hurtigruten is revered for a century of connecting parts of the country that are unreachable by road or train. Its ships are as much ferries as luxurious cruisers, delivering everything from people to mail and food to the most remote reaches.

The first Covid case traced to the Amundsen was in Hadsel, where Hurtigruten was founded in 1893. The town hadn’t had a Covid case in five months, and health officials had to dedicate scarce resources into containing the outbreak. “It’s a big job dealing with the sick and the possibly sick on board a ship, but then the infection spreads because passengers leave the ship,” said Ingebjorn Bleidvin, the medical officer in Hadsel who handled the case. In time, 69 municipalities in Norway responded to the outbreak, health authorities have said.

Bleidvin says Hurtigruten made the outbreak worse by taking too long to announce that Covid had struck the Amundsen. The company’s reaction and compliance with Norway’s Infection Control Act, which requires prompt reporting of Covid cases, is the subject of a criminal investigation by the regional police in Tromso, said prosecutor Lisa-Mari Ellingsen. “Hurtigruten, the company, is the main focus and is the one under suspicion here,” she said in an interview.

A Hurtigruten spokesperson declined to comment on the criminal investigation.

A risk management firm hired by Hurtigruten found failures in the Amundsen’s testing, quarantining and training of crew members. Once people started getting sick, doctors didn’t test them for Covid, the firm’s investigation found, and Hurtigruten didn’t announce the outbreak quickly enough.

In addition, Hurtigruten’s chief operating officer, who left the company shortly after the investigation was made public, said that CEO Daniel Skjeldam had told him to keep the company from being mentioned in connection to the positive Hadsel case, the report said. Skjeldam denied having done so.

Hurtigruten’s spokesperson said the company has taken multiple actions to correct the issues raised in the external investigation, including a plan to speed up notification if outbreaks occur. In the meantime, cruises are banned again in Norway due to the surge in Covid cases.

In the U.S., cruise lines face a kind of interim step before getting back to business. The government will require simulated cruises, monitored by CDC officials, to assure the protocols are being followed and are working. These faux cruises will come complete with volunteers posing as passengers.

The cruise companies are still planning how to make that happen, but they have one issue pretty well solved: There’ll be no shortage of volunteers. Royal Caribbean last month created a Facebook group called “Volunteers of the Seas” to gauge interest in simulated cruises after 3,000 people emailed the company asking how to sign up.

This news is a total 2378 time has been read
Tags: Biden Administration Faces Early Test with Cruise Shipping