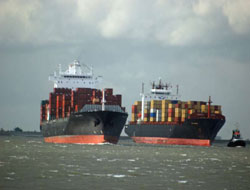 FEARS of overcapacity and slowing demand in the second half of 2012 has led Europe's major container lines to increasing rates to break-even against rising bunker fuel prices on Asia-Europe routes and a slowing European economy.

Danish giant Maersk and Germany's Hapag-Lloyd have announced US$500 per TEU rate increases from November 1 with Hong Kong's Orient Overseas Container Line (OOCL) bringing in a $525 per TEU hike as Geneva-based Mediterranean Shipping Co (MSC) increases its rates $500 per TEU.

However, the increases which make up 65 per cent of the global cellular fleet may be too little too late, said BIMCO analyst Peter Sand. Demand has evaporated faster than anticipated during the summer and the carriers have now been "caught a little bit behind" he said.

Capacity cuts across Asia-Europe lanes during 2012 include Maersk's 19 vessels at 21 per cent reduction and a complete closure of its G6 alliance Loop 3 service it shares with OOCL and Hapag-Lloyd until further notice.

Hanjin Shipping and Evergreen Line will cut 23 per cent capacity in the final quarter. CKYH alliance, which includes Cosco and Yang Ming will cut 7.7 per cent, or 30,300 TEU in the same period.

Despite the 20 per cent reduction in capacity, rates continue to slide to an average of $1,074 per TEU from Shanghai to northwest Europe and $1,076 per TEU for cargo shipped to the Mediterranean.

To break-even or to restore profitability, it requires a capacity slash of 33,400 TEU to bring an average freight rate and utilisation of $1,400/TEU achieved in first nine months of the year, said RS Platou analyst Herman Hildan, who saw a $250 per TEU, or 50 per cent of the rate increase to be retained.

Maersk Line hopes that by raising rates it will post a "modest" full-year profit after its substantial losses in first half of $372 million, which is further supported by a stronger second quarter up by $227 million profit due to rate increases.

Bunker prices will continue to hurt carriers such as Hapag-Lloyd, which suffered a first half loss of EUR139.7 million (US$181 million).

This news is a total 3062 time has been read