India and Russia Sign A Contract for Missile Frigates 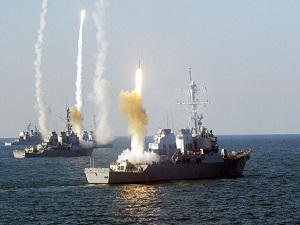 A government-to-government contract was signed between India and United Shipbuilding Corporation of Russia last week for the supply of two stealth frigates after two years of negotiations, an Indian Ministry of Defence official said.

The deal comes after Russian President Vladimir Putin visited India on Oct. 5 and the ruling National Democratic Alliance government cut a 5.43 billion dollar deal to buy five Russian S-400 Triumf missile systems despite objections from its ally the United States. The MoD official said the procurement of the frigates will involve a rupee-rouble transaction instead of using U.S. dollars to avoid American sanctions on Russian defense companies under CAATSA, or the Countering America’s Adversaries Through Sanctions Act.

The frigates are built by Yantar Shipyard of Russia and will be powered by Ukrainian gas turbine engines. They will be equipped with Indian-built radar, sonar, communication suites and anti-ship BrahMos missile systems, an Indian Navy official said. The ships are expected to be delivered by the end of 2022, the official added. India and Russia signed an agreement in October 2016 for the purchase and construction of four additional upgraded Kravak III-class stealth frigates, under which two frigates will be directly supplied by Russia and two others built at state-owned Goa Shipyard Limited in India though a technology transfer.

A separate contract will be signed next year for the construction of two similar stealth frigates in India. The 4,000-ton Krivak III vessels will also accommodate two multirole helicopters and will be used for anti-submarine and airborne early warning missions. India has already built seven basic versions of Krivak-class stealth frigates under the Navy’s Project 17A scheme at state-owned shipyards Mazagon Dock Limited, and Garden Reach Shipbuilders and Engineers. The Indian Navy currently has a fleet strength of 140 warships, with plans to increase that number to 198 by 2027.