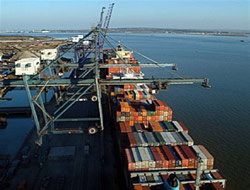 Port traffic at the 12 major ports, for the month of May, grew by 4.5% YoY to 47.8mn tonnes, owing to growth in container and POL throughput.

India: Port traffic volumes up 4.5% in May

Port traffic at the 12 major ports, for the month of May, grew by 4.5% YoY to 47.8mn tonnes, owing to growth in container and POL (petroleum oil and lubricants) throughput. POL and container traffic that constitutes 50% of the total port traffic grew 10.7% YoY in May. Iron ore, fertilisers and coal constituting 33% fell by 7.6% YoY.

Traffic at major ports remained steady in May post the year-end spike witnessed in March due to increased movement in container and POL, said Siddhartha Kemka, analyst, Centrum broking in his note.

According to Rajni Mahadevan and Supriya Madye Khedkar, analysts with ICICI Direct, the overall market share of Kandla, India"s largest port, by volumes handled surged by 176 bps MoM to 15.4% in May on account of higher POL traffic. The ports at the eastern coast have lost market share in POL traffic by 4.9% YoY and Mumbai Port lost 3.2% YoY, which has been primarily grabbed by Kandla port on the western coast.

The underperformers in April 2010 (Paradip, Vishakhapatnam, Haldia and New Mangalore ports) have moved up in the performance ladder; however, JNPT, Mormugao and Tuticorin
disappointed with poor performance in May.

However, going forward, BDI has seen a continuous fall in first half of June and has come down to 3,288 levels as on June 11. ?The sequential fall in BDI in June has indicated that port volumes will be under pressure in June. Therefore, if the same trend continues in second half of the month, there would be a sequential fall in port volumes in June,? said Mahadevan.

This news is a total 9501 time has been read