India says it aims to be 'global leader 'ship recycling 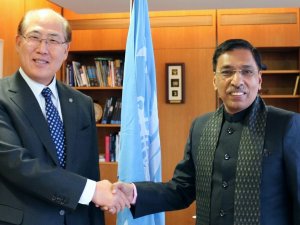 India Ministry of Shipping secretary Gopal Krishna revealed these plans in a Confederation of Indian Industry (CII) Energy event held on 19 November. Mr Krishna told delegates that the country is boosting its ship recycling capacity by 40% by 2024.A CII tweet summarised Mr Krishna’s comments “India aims to be a global leader in ship-recycling: capacity being raised from 5mn GT (2018, 25% of global) to 9mn GT (2024, 35-40%). Recycling of Ships Bill, 2019 will align law with international conventions: focus on the environment, worker safety.”This ties in with a greater international movement on ship recycling. December 2020 will be a key month for the EU’s Ship Recycling Regulation (SRR) as from 31 December 2020, the Inventory of Hazardous Materials (IHM) requirement will be expanded to the existing EU fleet.

Owners of non-EU flagged vessels also need to have an understanding of the SRR and IHM process as, from 31 December 2020, equivalent non-EU flagged vessels calling at EU ports or anchorages will also be required to carry and maintain an IHM.Mr Krishna also announced at the event that India intends to develop an ’all-weather’ container port at Wadhavan, north of Mumbai that will have nine berths for the largest container ships. He said that approval for the project was expected in two to three months, with construction slated to start in 2020. He announced that the port would bring India into the global container ports top 10 rankings.Mr Krishna also expanded on the Government’s plan to develop inland waterways. He revealed that the inland water transport fairway in the Ganges will be opened by 2020 and the Eastern Waterway Connectivity Transport Grid will provide the North-East with access to Nepal, Bhutan, Bangladesh and Myanmar.