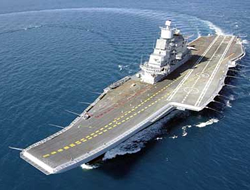 Russia has delivered the long-delayed aircraft carrier INS 'Vikramaditya to India, reports Reuters India, handing over the vessel at a far northern shipyard near the Arctic Circle.

The delivery underpins India’s military expansion ambitions in South Asia, particularly the Indian Ocean, amidst significant sabre-rattling from China in the same region. The Indian Government is reportedly spending up to US$100 billion over the next decade to re-vamp and re-modernise its mostly Soviet-era military.

Formerly a Soviet-era ship named ‘Admiral Gorshkov’, the vessel has been equipped to carry up to 30 Mig-29K fighter jets and have a crew of around 2,000, continued Reuters India.

The deal for the vessel was inked in the mid-2000s after “a decade of negotiations”. Initially to be ready in 2009, the price was increased and delivery delayed until 2012. The handover was then delayed by another year, said the news agency.

Aircraft carriers have held particular significance among the world’s rapidly developing world powers, with China putting its (also Soviet-built) carrier ‘Liaoning’ into service in the South China Sea amidst tension with Japan over contested islands, and India building its first indigenously constructed carrier to be operational by 2017.

India's first aircraft carrier was British-built and bought in the 1960s. Decommissioned in the late 1990s, another ex-British carrier, the INS ‘Viraat’, is in operation but is reaching the end of its service life, concluded Reuters.