Indian-made aircraft carrier Vikrant will be commissioned by early 2021 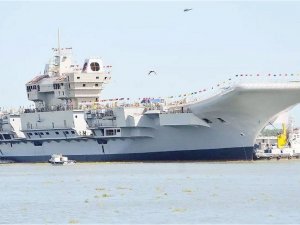 According to news published on the newspaper website "The Economic Times" on January 9, 2019, the first Indian-made aircraft carrier Vikrant will be commissioned by early 2021.

According to Indian sources, phase three of the construction of Vikrant is under progress, which involves setting to work of machinery and equipment, like power generation and propulsion machinery.

The Vikrant aircraft carrier is being built at the Cochin Shipyard Limited (CSL) who is the largest shipbuilding and maintenance facility in India. The first Indian-made aircraft carrier Vikrant along with MiG-29K aircraft will be showcased as part of the Navy's tableau during the ceremonial parade on Rajpath on Republic Day 2019, officials said.

The Vikrant aircraft carrier is 262 meters long and 60 meters wide and displaces about 40,000 metric tons. It features a STOBAR configuration with a ski-jump. The deck is designed to enable aircraft such as the MiG-29K to operate from the carrier. It is expected to carry an air group of up to thirty aircraft, which will include up to 24–26 fixed-wing combat aircraft, primarily the Mikoyan MiG-29K, besides carrying 10 Kamov Ka-31 or Westland Sea King helicopters. The Ka-31 will fulfill the airborne early warning (AEW) role and the Sea King will provide anti-submarine warfare (ASW) capability.

The Vikrant aircraft carrier is powered by four General Electric LM2500+ gas turbines on two shafts, generating over 80 megawatts (110,000 hp) of power. The gearboxes for the carriers were designed and supplied by Elecon Engineering.

The ship's combat management system (CMS) was developed by Tata Power Strategic Engineering Division in collaboration with Weapon and Electronics System Engineering Establishment and MARS, Russia. It is the first CMS developed by a private company for the Indian Navy, was handed over to the Navy on 28 March 2019.