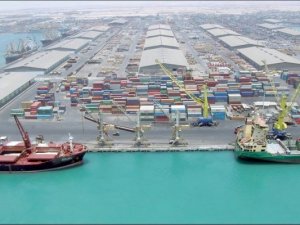 "So far, the CIS countries could be reached only via China or Europe," Mansukh Laxmanbhai Mandaviya was quoted by Indian media 'Deccan Herald' as saying.

"In a strategic development, loading and unloading of cargo have started at Chabahar Port. Container transport logistic costs to CIS countries will be reduced by 20 percent through Chabahar. So far, cargo to CIS countries from India could be sent only via China or Europe," he added.

"If we want to send containers to CIS countries we can only send via Europe or China. There was no other connectivity with CIS countries. Now, we have developed Chabahar port and there is direct connectivity to these countries via Afghanistan," the Indian minister noted.

"This is very important for the country. This is strategic. Container transport logistic cost will be reduced by 20 percent," he reiterated.

Chabahar, the sole Iranian oceanic port, is an important area on the Persian Gulf and Sea of Oman shores and in North-South Corridor.

It is located in the East-West transit path and is of importance with regard to transit and trans-ship.

Chabahar has turned out to be a vital area for sending Indian products to Afghanistan and Central Asia.

The Indian government has allocated about a 14-million-dollar budget for developing Chabahar Port in 2020-2021 which had a two-fold rise compared to last year.

Growth in the allocated budget indicates India's commitment to developing the port and New Delhi determination for changing Chabahar Port into a connecting point.

Due to its strategic position and its access to international high seas, Chabahar is of importance with regard to Iran's trade interactions with other regional countries.

Chabahar, as Iran's only ocean port, plays an important role in developing trade, exports, and imports and in fishing as well.

Supreme Leader of the Islamic Revolution Ayatollah Seyyed Ali Khamenei's special attention and the efforts made by President Hassan Rouhani's government have accelerated development of Makran Coasts, especially Chabahar Port, in a way that five big ships carrying basic goods, including wheat, barley, soybean, and corn berthed in one week.

This news is a total 2571 time has been read
Tags: Indian Minister: India to save logistic costs using Chabahar for transport