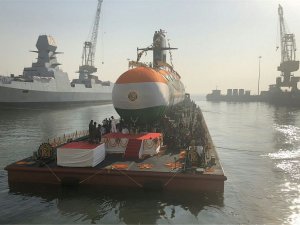 According to news published on December 30, 2019, by Indian newspaper websites, the Indian Navy plans to build 24 submarines, including six nuclear attack submarines.

Currently, the Indian Navy has 15 conventional submarines and two nuclear submarines in its naval fleet.

The Indian Navy has a plan to build six new submarines as part of Project 75 India (75I-class submarine), in which six more conventional submarines are to be built by the Navy in cooperation with Indian companies and equipment manufacturers with foreign origins.

The Indian Navy’s Project 75I (P75I) is based on the Scorpene-class submarine designed by the French Company Naval Group that could be built in India by Mazagon Dock in Mumbai, India, using the technology and training provided by Naval Group.

The submarines in the P75I Scorpene-class are powered by conventional diesel-electric propulsion systems. The last two submarines are expected to be equipped with AIP technology, which is developed by DRDO to provide long-range and extended endurance capabilities. The submarines are also installed with batteries.

The P75I Scorpene class submarines will be armed with six torpedo launching tubes, 18 heavy weapons, tube-launched MBDA SM-39 Exocet anti-ship missiles and precision-guided weapons. The weapons are carried in weapon launching tubes and can be easily reloaded at sea.

This news is a total 623 time has been read
Tags: Indian Navy, build 24 submarines, including six nuclear attack submarines.