Indictment for polluting the sea 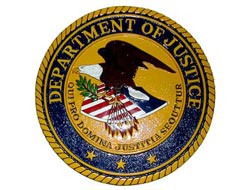 A federal grand jury in Newark, N.J., has returned an eight-count indictment charging a Liberian company along with 2 engineers for covering up discharges of oil-contaminated waste at sea.

A federal grand jury in Newark, N.J., has returned an eight-count indictment charging a Liberian company along with 2 engineers for covering up discharges of oil-contaminated waste at sea.

A federal grand jury in Newark, N.J., has returned an eight-count indictment charging a Liberian company that manages an oceangoing bulk carrier vessel, M/V Myron N, along with the ship's chief engineer and second engineer for covering up discharges of oil-contaminated waste at sea, the Justice Department announced today. Dalnave Navigation Inc., a company incorporated in Liberia with offices in Athens, Greece, Chief Engineer Panagiotis Stamatakis and Second Engineer Dimitrios Papadakis, both of Greece, were each charged with conspiracy and violating the Act to Prevent Pollution from Ships (APPS) by failing to maintain an accurate ship record concerning the disposal of oil-contaminated waste. They were also charged with making false statements to U.S. Coast Guard authorities regarding the pumping of oil-contaminated waste overboard and five counts of obstruction of justice concerning the statements made to the Coast Guard.

Federal and international law requires that all ships follow pollution regulations that include proper disposal of oily water through an oil water separator on board the vessel. Large vessels generate oil-contaminated water waste when water mixes in the bottom of the vessel, the bilge, with oil leaked from the machinery and the lubrication and fuel systems. Such oil-contaminated bilge waste may properly be disposed of by off-loading it to a licensed hauler and disposal facility at port, or by discharging it overboard after the oil is separated out using the vessel's oil water separator. Federal law further requires ships to accurately record each disposal of oil-contaminated bilge water in an oil record book and to have the oil record book available for inspection by the Coast Guard within the internal waters of the United States.

The details contained in the indictment are allegations. The defendants are presumed to be innocent unless and until proven guilty beyond a reasonable doubt in a court of law.

This news is a total 750 time has been read