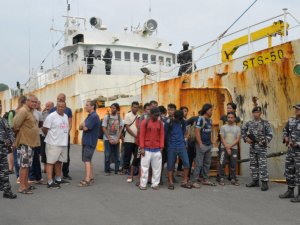 Indonesia, acting on a request from Interpol, has seized a fishing boat carrying 600 illegal gillnets that can stretch up to 30 km (18 miles) after it evaded capture in several countries, the Fisheries Ministry said.

The vessel, the STS-50, had targeted Antarctic toothfish, the ministry said, a cod species that plays an important role in the Southern Ocean ecosystem.

Gillnetting, which uses walls of finely meshed nets, has been banned in Antarctic waters since 2006 and is described by Australia as posing a huge risk to “almost all marine life.”

Officially stateless, the STS-50 evaded authorities by flying eight different flags at different times, including those of Sierra Leone, Togo, Cambodia, South Korea, Japan, Micronesia and Namibia, the ministry said in a statement on Sunday.

Interpol contacted Indonesia last week with a request to investigate the vessel, Fisheries Minister Susi Pudjiastuti said in the statement.

The vessel had earlier been detained by China but had escaped and was later detained in the port of Maputo in Mozambique before fleeing again, Pudjiastuti said.

Prior to its capture off the Indonesian island of Weh in the northwestern province of Aceh, the vessel had also operated under several other names including Sea Breeze, Andrey Dolgov, STD No. 2 and Aida, the statement said.

At the time of its capture, the STS-50 had 20 Indonesian and Russian crew, the statement said.

It was not immediately clear what would happen to the crew.

Navy deputy chief of staff Achmad Taufiqoerrochman was quoted in the statement as saying the Indonesian crew lacked travel documents and had been at sea for a long time without pay, indicating they may have been victims of trafficking.

Fishing for Antarctic toothfish is governed under the Convention for the Conservation of Antarctic Marine Living Resources, which forbids gillnet fishing and imposes strict rules on catches in the Southern Ocean.

“We want this to be an example for the world to not compromise with illegal fishing,” Pudjiastuti said.

Indonesia has destroyed hundreds of foreign illegal fishing boats since 2014 in an effort to protect domestic fish stocks and fishermen.

In 2016, Indonesia assisted Interpol in the landmark capture of a giant Chinese-flagged vessel that had evaded Argentina’s navy and fled into international waters after it was suspected of illegal fishing there.

The same year, Indonesia blew up a giant illegal toothfish fishing vessel that had operated under 12 different names and flown flags of at least eight different countries.

This news is a total 1207 time has been read
Tags: Indonesia Seizes Fugitive Fishing Boat Carrying 18 Miles of Illegal Gillnets