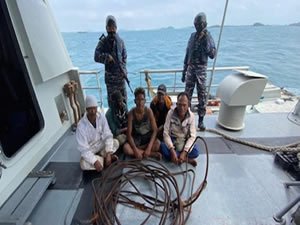 The Indonesian Navy successfully intercepted five pirates in the middle of a theft aboard a barge in the Singapore Strait.

The suspects allegedly boarded the barge Linau 133 as it was under tow by the Malaysian tugboat Danum 50 off the Riau Islands. At about 1220 hours, the Indonesian Navy vessel KRI Siwar-646 was under way on a routine patrol near Karang Banteng (Buffalo Rock), her crew spotted suspicious activity aboard the barge. Three people appeared to be transferring wire rope into two speedboats alongside.

The crew of the Siwar-646 approached the tug, and at 1235 hours they executed a successful interdiction, stopping the boats and arresting five suspects - along with about 330 pounds of rusted wire rope.

The suspects did not have identification, according to the Indonesian Navy, and they were brought to the base at Batam for further investigation. The tug and its tow were also temporarily detained as part of the inquiry, according to local media.

The large number of jerry cans aboard the speedboats indicates that the suspects may have had other targets in mind: fuel theft is a common form of piracy. "It looks like they're also multiplayer," Rear Adm.Yayan Sofiyan told Batampos.

This news is a total 5412 time has been read
Tags: barge Linau 133 , Riau Islands , Indonesian Navy , INDONESIAN NAVY CATCHES FIVE PIRATES IN THE ACT OF RAIDING A BARGE