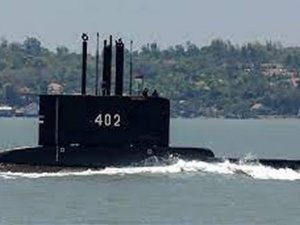 Submarine sank with all 53 crew on board, there was no chance of survival taking into account wreck site depth, which is far exceeding submarine's dive depth.

Apr 25 UPDATE: Submarine sank with all 53 crew on board, there was no chance of survival taking into account wreck site depth, which is far exceeding submarine’s dive depth.

Submarine disappeared in area with 600-700 meters depths, so if she sank, she is crushed by enormous depth pressure far exceeding her max depth endurance of 240-250 meters, leaving no chance of crew survival.

The only hope is, she lost control including dive/surface control, but remains floating at survivable depth.

Apr 21: On Apr 21 all contacts were lost with Indonesian Navy KRI NANGGALA (402) Cakra-class submarine with 53 crew, which was conducting torpedoes drill in Bali sea, some 20 nm (according to AIS data) north of northern Bali island coast.

The Navy Chief of Indonesia officially announced the submarine from submiss to subsunk. They found traces of the wreckage of the submarine within 10 km of the crash site, including parts of torpedo tubes, grease cans, and jainamaz. He confirmed that the wreckage had started floating on the surface as the submarine had completely collapsed due to excessive water pressure.Thoughts and respect go out to these brave sailors, families and fellow Naval comrades.

This news is a total 892 time has been read
Tags: accident KRI NANGAALA 402 submarine