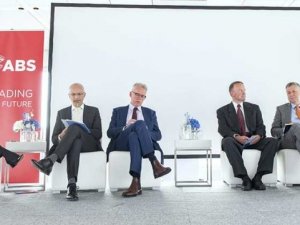 At the ABS panel discussion marking the opening of SMM 2018, shipping leaders discussed the challenges ahead as the industry prepares for the IMO 2020 fuel sulfur content regulations.

“This regulation will have the biggest impact on the industry since the phasing out of single hull tankers. This will be felt well beyond shipping, affecting the refining and power industries as well as ultimately consumers," said Tikka.

The panelists discussed the cost and quality of fuel oil, the case for LNG or scrubbers, operational challenges, issues with enforcement, bunker fuel availability and the vital role of refineries.

As in other discussions, opinions differed on the promise of exhaust gas scrubbers. Goldman's Christian Lelong said that he foresees a significant role for the technology. "We are becoming more positive on scrubbers; production capacity is increasing and may surprise us. In a perfect world the industry would have made investments over a time longer period than two years," he said.

However, Euronav CEO and sulfur-regulation skeptic Paddy Rodgers cautioned that scrubbers are not a panacea. “Scrubbers are not a license to burn fuel oil," he warned. "You are compelled to monitor and report what you do. I think we are heading into territory similar to the oily water separator regulations where you could be penalized regardless of the fuel burned. The idea that scrubbers are a ticket to ride is a misnomer.”

Lars Robert Pederson, Bimco's deputy general secretary, pointed to the likelihood of quality-control problems in the post-2020 fuels market. "I think the problem in 2020 is going to be the quality of blended fuel and we are bound to see more cases of fuel quality issues," he said. “MARPOL contracting governments will need to do what they committed to and take action when the fuel supplied is not what is specified."

Warsila's Aaron Bresnahan noted the promise of sulfur-free liquefied natural gas as a compliance option. "We support LNG even though its adoption has been slowed by the classic chicken and egg problem of supply and demand," he said. "Some of the recent choices by big shipowners have been a step forward because we will need LNG infrastructure to service bigger ships.”

This news is a total 572 time has been read
Tags: Industry Leaders Debate Post-2020 Bunker Market at SMM