Industry set to get hotter in Asia 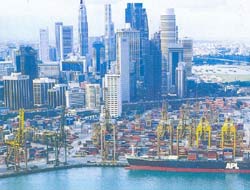 Maritime industry set to get hotter in Asia

According to a report by business intelligence consultancy Fusion Consulting, Asia already has 39 per cent of the market - a figure which is forecast to grow at an annual rate of 7 per cent between 2006 and 2010.

Maritime services, the offshore industry and freight forwarding are seen as the fastest growing parts of the trade, with different regions developing their own areas of specialisation. But although fast growing, freight forwarding and maritime services start from a relatively low base, being valued at just US$3 billion and US$9 billion respectively.

'The maritime industry across Asia-Pacific will continue to develop its core competencies and improve its competitive advantage in the specialised market segments of FPSO (floating production, storage and offloading) conversion, offshore support vessels and shipbuilding,' said Peter Davey, strategy director at Fusion Consulting in Singapore.

Asia, however, is expected to be the main battleground for port supremacy. Singapore, Hong Kong and Shanghai are far ahead of the pack in terms of container traffic but China's ravenous demand for commodities has meant that Shanghai (537 million tonnes) has overtaken Singapore (448.5 million tonnes) in terms of cargo handled.

Fusion's figures also show that the Asia-Pacific region amounts to US$43 billion or 42 per cent of the global market for port operations and services, and this is expected to grow to 44 per cent or US$54 billion by 2010.

'The main areas of growth in ports and terminals are expected in China, India and Korea,' Fusion predicts. The report adds that by 2011, it expects Asia to handle 206 million TEU (containers), including 64 million TEU in transshipment.

Fusion also noted the recent trend of China buying up interests in ports around the world to secure international shipping routes while also gaining direct access to raw materials. Chinese private companies' investments in a range of Latin American ports from Argentina to Panama are cited as examples.

The offshore and shipbuilding and repair sectors are also set for strong growth, Fusion predicts. The global market for offshore operations is currently worth US$136 billion but this is expected to hit US$159 billion by 2010. Asia Pacific's market share of 23 per cent is set to rise from US$31 billion now to US$41 billion by 2010, at an annual growth rate of 8 per cent.

Rig building makes up the bulk (94 per cent) of the sector and Singapore companies like Keppel Offshore and Marine - with 52 per cent and 26 per cent of global market share in jack-up rigs and semi-submersible rigs respectively - and Sembawang Marine are the world leaders in this field.

The booming shipbuilding and repair sector is changing rapidly, Fusion said. The region's shipbuilding industry has a 66 per cent market share and is worth US$43 billion, the report said.

South Korea (with over 40 per cent market share) has gained the most, but China (15 per cent share) is hot on its heels and has secured more than half of the total contracts in the first quarter of last year for bulk carriers and smaller tankers to be delivered by 2009.

Finally, the region's share of the ship repair and maintenance market is forecast to grow from 45 per cent to 48 per cent or US$7 billion in value by 2010. Established repair yards in Singapore, Hong Kong and Korea especially are seen expanding in China through joint ventures as they look for low-cost bases.

'In the long run, the ship repair industry in Singapore is likely to be threatened by the rise of low-cost ship repair yards in China, India, Indonesia and Vietnam,' the report said. 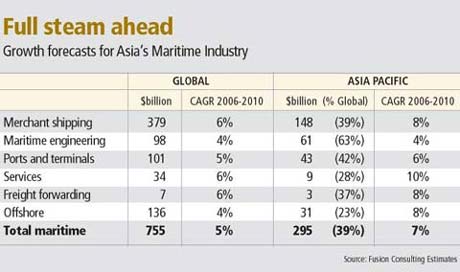 This news is a total 659 time has been read