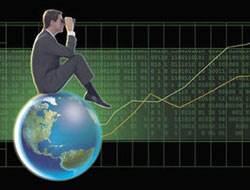 Access to credit is the lifeblood of maritime trade and the credit crunch has largely cut off that supply, threatening to weed out weaker shippers and shipyards, as well as hamper global trade.

Access to credit is the lifeblood of maritime trade and the credit crunch has largely cut off that supply, threatening to weed out weaker shippers and shipyards, as well as hamper global trade.

"The credit crisis has made banks nervous and the last thing on their minds is making fresh loans," said Omar Nokta, an analyst at investment bank Dahlman Rose.

"Some ship owners and shipyards in particular are feeling the pain. The outlook is worst for the bulk shipping industry, which hauls raw materials such as iron ore, grain and cement. More than 90 percent of the world's traded goods by volume is carried by sea''.

Access to credit has been cut off at an inopportune time for the industry, after several years of robust growth in markets like India and China -- accompanied by huge infrastructure investments -- spurred a race to build new ships, creating three-year backlogs on shipyard order books.

Orders reached a milestone of 10,000 ships on Aug. 1. But ordering ships is one thing, paying for them is another.

"There has been a further tightening (in lending conditions) over the summer," Harald Serck-Hanssen, Norwegian bank DnB NOR's ship-financing unit said last month.

Some banks had shut their books for the year and the limited shipping lending banking universe was shrinking, he said.

Serck-Hanssen spoke before the bloodbath on Wall Street of the past two weeks in which credit conditions have worsened for shippers and shipyards, especially newer or smaller operators.

"Some of the newer shipyards (in South Korea and China) are going to suffer a great disappointment," said Polys Hajioannu, chief executive of bulk shipper Safe Bulkers Inc. "They will not be able to deliver a number of ships."

"Some smaller shippers will also have trouble getting financing to pay for the ships they ordered," he added.

Many of those companies put down a 20 percent deposit for their ships when credit conditions were better, but will have trouble raising the rest, Hajioannu said.

Some shippers and analysts have noted that letters of credit -- bank guarantees on behalf of buyers that are given to exporters and which are an important aspect of global trade -- have become scarce, leaving some cargoes stranded.

And analysts like Dahlman's Nokta argue the credit crunch may force governments in Asia to slash infrastructure spending -- on roads, railways, bridges, airports -- if they need to bolster their financial sectors in a slowdown.

A long way down

The market turned sour rather quickly. In May, the Baltic Exchange's chief sea freight index for global raw materials hit a lifetime high of 11,793 points on demand in fast-growing developing markets including China and India.

The index has plummeted since then due to the financial turmoil on international markets, falling commodity prices and fears that Asian demand will falter. On Oct. 2 the freight index fell to 2,990 points, nearly 75 percent down from the May high and its lowest level in more than two years.

Despite that decline and the apparent lack of available credit, shipyards have reported few cancellations so far for bulk carriers or other ships.

For instance, South Korea's Hyundai Mipo Dockyard Co Ltd announced on Aug. 1 it had canceled a 197 billion won ($164 million) order for four product carriers. But the company said this was not due to market issues but the problems of the buyer -- an unidentified European company -- and at the same time announced a 411.9 billion won order for eight bulk ships.

"However, Chinese and second-tier players are likely to face challenges in receiving orders due to toughened terms and ship financing conditions."

But Stamatis Molaris, CEO of Excel Maritime Carriers Ltd, said that if the credit crunch does not end soon then the newer shipyards will "fall like a house of cards."

Molaris said some cargoes had been left on docks in numerous markets as banks were more reluctant to fund trade.

"The demand for goods is there; there is just not enough liquidity to move those goods around," he said.

Tight credit markets, plus an increased emphasis on letters of credit "may create a headwind for dry bulk stocks if rates remain low enough to drive charter defaults," Wachovia analyst Justin Yagerman wrote in a note for clients.

Dahlman's Nokta said a crucial test for the sector will be how badly the credit crisis affects Asia's financial sectors.

"If Asian governments have to bail out their financial institutions, funding could be cut for important infrastructure investments," Nokta said.

But Safe Bulkers' CEO Hajioannu said as long as the credit crisis is dealt with quickly, Asian demand will stay strong.

"Developing countries like China and India are half way through an unprecedented modernization requiring massive infrastructure spending," Hajioannou said.

"There is no way that process can be stopped in the middle."

This news is a total 1752 time has been read