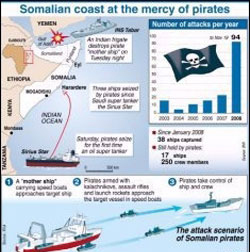 Everybody is scared of the pirates

Businessmen who send cargo ships from Dubai to Somalia said yesterday their fear of attacks by pirates had increased after the hijacking of the Saudi Arabian tanker Sirius Star. Dozens of ships of different sizes are loaded with all sorts of goods at Dubai"s docks each day before travelling to Mogadishu. Muslim Faisal Khan, of Majid Abdulla Shipping, said attacks by pirates had stopped the company sending ships to Somalia. ?Everybody is scared of the pirates,? Mr Khan said. ?We are a small company and if we get caught we will require millions to release our ship. We do not want to get into such trouble.? Mohammed Salim, a sailor on the ship Al Bilal, said pirates were getting bolder and better armed with every attack. ?We are always scared that we might be attacked,? he said. ??He said that while pirates used to board ships armed with swords and daggers, they now carried rifles, grenade launchers and automatic pistols. In groups of 10 to 15, the pirates chased the ships in petrol-engined boats.

The pirates are quick

?Even if we see the pirates coming towards us we can"t do much, because they are quick ? Mr Salim said. ?We try and delay the ship so that we reach the Somalia waters by around 4am to 5am. At this time the pirates are usually asleep and we can get to the port safely.?

?There are thousands of ships still going to Somalia because the business is good,? said a sailor on the ship Safina Al-Bisarat, which was targeted by pirates two years ago. ?There are threats, but there is no point getting scared of this.?

This news is a total 668 time has been read