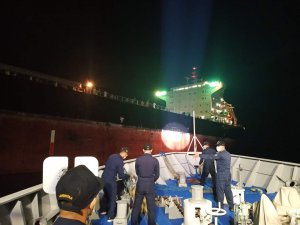 The ship, identified as the 90,540 cbm Wu Zhou 8, was en route to Geraldton, Australia from Bunati, Indonesia, at the time of the incident, according to the bulker’s AIS data.

As informed, the sailor, a Chinese national, accidentally fell into the cargo hold and sustained head injury while on duty.

Following the operation, the injured man was transported to a local hospital for further medical assistance.