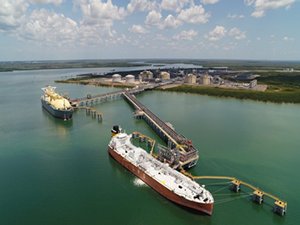 Japanese oil and gas major Inpex is set to cut the workforce numbers at its Ichthys liquefied natural gas project in Australia.

Likewise, the U.S. major Chevron is set to reduce the workforce at its Australian projects.

The latest cuts are a continuation of the effects the coronavirus pandemic had on fuel demand and the resulting slump in oil and gas prices.

Such an environment has forced the company to review its operations at the Ichthys LNG project.

This will impact a number of roles in the Operations division, Reuters reports.

Production has not been affected by the current environment.

CHEVRON TO LET AROUND 400 PEOPLE GO

In parallel with Inpex, Chevron is continuing with its plan to reduce the workforce. The U.S. major has unveiled plans to reduce its numbers by 15 per cent earlier this year.

For Australia, where Chevron operates its Gorgon and Wheatstone LNG project this could involve some 410 jobs. Earlier this month, Chevron informed it is delaying the restart of its second liquefaction train at the Gorgon LNG facility.

The company will take additional time to complete repairs of the propane heat exchanger on Gorgon LNG Train 2.

Stena Bulk involved in onboard carbon capture projectThe Swedish tanker giant is working with the Oil and Gas Climate Initiative (OGCI), a voluntary energy major group, on a feasibility study to evaluate the technical and economic challenges involved when capturing carbon dioxide onboard ships while at sea

Forfeiture of Iranian Gasoline From Venezuela-Bound TankerAmerican authorities claim to have intercepted several shipments of Iranian petroleum in August 2020, forcing at least two vessels to bring their cargo to US ports.

FSO Nabarima With Severe List Off VenezuelaAn alarming photo is making the rounds on the internet today showing an idled Floating Storage and Offshore (FSO) vessel containing tens of million of gallons of oil with a severe list off the coast of Venezuela, raising fears an environmental disaster.

Maritime Comity: the first in a new series for Aurora TankersAurora Tankers is the shipping arm of the IMC Industrial Group. The Group’s beginnings go back to 1949 when the business was founded in Hong Kong by the late Tan Sri Frank Tsao, before International Maritime Carriers (IMC) was established in 1966.