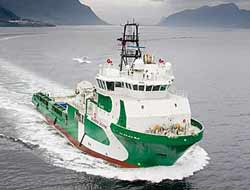 The inquiry into the tragic loss of BOURBON DOLHPIN and the loss of eight of her crew, including the captain and his 14 year old son, is underway in Alesund, Norway.

Inquiry begins, survivor says there is no doubt as to cause of tragedy

The inquiry into the tragic loss of BOURBON DOLHPIN and the loss of eight of her crew, including the captain and his 14 year old son, is underway in Alesund, Norway.

Three survivors were amongst the witnesses giving their accounts yesterday and key to the findings are the accounts given to the inquiry from the only survivor who was on the bridge as she capsized.

Geir Syversen was quoted in the Norwegian press before the inquiry began as saying he knows what caused the incident and that once he told his story, no-one will be in any doubts as to the cause.

Yesterday he told the inquiry that whilst working alongside another vessel, the HIGHLAND VALOUR, they got into difficulties whilst handling an anchor for the oil rig they were working with.

At one point HIGHLAND VALOUR was radioed and was told to go northwest, but it went in the other direction and the DOLPHIN's captain took the radio and said to the other vessel "Don't you know the difference between north west and south east?"

Syversen implied that the HIGHLAND VALOUR's inability to take her share of the work left a burden on BOURBON DOLPHIN whereby it took a lot of effort to hold her against the wind and maintain position. With her difficulties increasing it became clear the vessel was in grave danger.

The captain ordered that the chain be released but, the inquiry was told, the mechanism failed to work properly and they could not get rid of it fast enough. Soon after the vessel heeled right over.

This news is a total 1143 time has been read