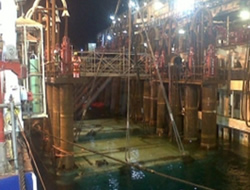 The installation of sponsons on the Concordia wreck is gaining momentum despite several glitches that occurred earlier this month.

According to the Parbuckling project team, the installation of four sponsons on the starboard side has been completed, those being S12, S11, S10 and S9.

In addition, the positioning of the sponson S8 is underway as well.

The collapsed sponson S13, which sustained some damages, is being repaired in Genoa. However, the project team did not specify when are the repairs expected to be completed.

The S13 sponson, which was the first to had been installed on the Concordia wreck within its refloating plan, collapsed in the beginning of the month having lost balance due to the movement of internal water within the sponson.

The sponson arrived in Genoa for repairs last week on the Pontoon Mak.

This news is a total 1500 time has been read