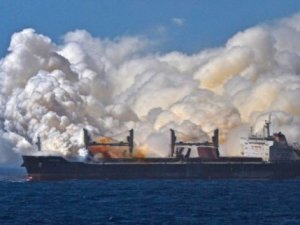 The International Association of Dry Cargo Shipowners (INTERCARGO) has released a report into bulk carrier casualties from 2008 to 2017, providing an analysis of statistics and trends over the last ten years of bulk shipping.

According to the report, 53 bulk carriers over 10,000 dwt have been identified as total losses during the 2008 to 2017 time period, with cargo shift and liquefaction contributing to the greatest loss of life among seafarers in the bulk shipping trade.

In total, cargo failure, i.e. liquefaction, has been blamed for nine vessel casualties from 2012 to 2015 resulting in the loss 101 lives. The nine casualties consisted of six bulk carriers carrying nickel ore from Indonesia, two vessels with laterite (clay) iron ore from India, and one with bauxite from Malaysia. The number of fatalities from cargo failure accounts for exactly half of 202 total lives lost among the 53 total losses recorded from 2008 to 2017, according to INTERCARGO.

Looking back to 2008, the most common reported cause of ship losses has been grounding, totaling 22 losses among the 53 cases. A total of six ships were lost to unknown causes that claimed the lives of 61 seafarers. Meanwhile, reported flooding led to losses of 8 ships and 14 lives.

In 2017, the INTERCARGO database recorded a total of 337 bulk carrier incidents.

The number includes the tragic losses of the MV Stellar Daisy in the Atlantic Ocean while carrying an iron ore cargo from Brazil to China, as well as the MV Emerald Star, which sank off the Philippines while loaded with a nickel ore cargo. A combined 32 seafarers lost their lives in the two incidents, the highest loss of life since 2011 when annual ship losses last peaked. The two incidents also raised questions of structural integrity and safety condition of high density cargoes carried on board.

Also in 2017, serious concerns over the safe carriage of ammonium nitrate-based fertilizer arose when about 50,000 tonnes of the stuff overheated in the cargo holds of the supramax bulk carrier MV Cheshire in August 2017.

In releasing the report, INTERCARGO said wished to stress the importance of the timely submission of casualty investigation reports to the IMO from relevant flag States, “as a means of identifying the causes of the incidents and enabling corrective actions,” the trade group said.

This news is a total 1075 time has been read
Tags: INTERCARGO Analyzes 10 Years of Bulk Carrier Casualties