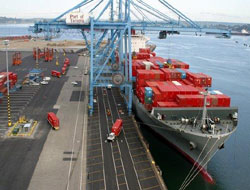 The Port of Tacoma is testing a satellite system that tracks intermodal containers.

The Port of Tacoma is testing a satellite system that tracks intermodal containers.

To enhance inland rail supply-chain visibility, the Port of Tacoma is testing a satellite system that tracks intermodal containers from the time they leave waterfront terminals until they reach their destinations in the Midwest and eastern U.S.

The system allows port inter-modal planners to better understand inland rail issues and, ultimately, work with railroads and shippers to improve the speed and reliability of freight.

Joining in the test project are BNSF Railway, Yang Ming Line and Safefreight Technology of Edmonton, Alberta, the developer of the system.

The test, which began in June, utilizes a portable tracking device originally designed for truck trailers and vehicle fleets.

The SecurityGuard tracking device transmits data wirelessly through cellular communications to a Safefreight server. The data is then made available to the port over the Web. When no cellular service is available, the device stores the data for later transmission.