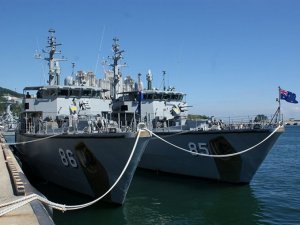 IMX 2019 is a multinational engagement involving partners and allies from around the world sharing knowledge and experiences across the full spectrum of defensive maritime operations. The exercise serves to demonstrate global resolve in maintaining regional security and stability, freedom of navigation and the free flow of commerce from the Suez Canal south to the Bab-el-Mandeb through the Strait of Hormuz to the Northern Arabian Gulf.

The exercise is the sixth of its kind, having last conducted in 2017. It will be held in four phases, including staff build-up and training, seminars and table-top discussions, the at-sea Fleet Training Exercise and redeployment of forces.

Events will be conducted in the Persian Gulf, Sea of Oman, the Gulf of Aden and the Red Sea, and will involve air, surface and underwater mine countermeasure operations and harbour force protection scenarios with unmanned underwater vehicles, the Command said.

The Mine Warfare Exercise will see units challenged with searching for, identifying and clearing maritime mines in challenging conditions in the south of the Republic of Korea. Units will share knowledge, skills and equipment to achieve exercise objectives.

Joining units from the Republic of Korea Navy and the United States Navy, HMAS Ships Diamantina and Gascoyne from Royal Australian Navy, have sailed to participate in the 2019 Multinational Mine Warfare Exercise being conducted in the waters off South Korea.

This is only the second time Royal Australian Navy Minehunters have contributed to MIWEX and the first time a Task Group Command element (CTG) has joined the ships for deployment. The Task Group Command, Diamantina and Gascoyne are taking part in the Multinational Mine Countermeasure Symposium and Mine Ware Exercise in Korea as part of a four-month North East Asian Deployment.

The RAN ships will utilise remote mine disposal vehicles in a positive demonstration of the high-quality equipment in use to meet the mine-hunting challenge. The RAN units will operate closely with the United States and Korean vessels and seek opportunities to gain mutual benefit and enhance lessons learnt.