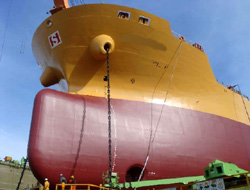 The result could be the final liquidation of the assets of the shipyards at Gdynia and Szczecin and the complete and final closure of the yards if a buyer is not found.

Stichting Particulier Fonds Greenrights was said to be representing the highest bidder when the country"s treasury put the two yards in Gdynia and Szczecin up for sale in an Internet auction as part of the government"s agreement with Brussels.

The buyer behind the bid is believed to have financial backing from the Qatari bank QInvest, although its identity remains unknown.

Poland had already managed to sell off the Gdansk Shipyard as part of its privatisation process in accordance with the conditions of it being a member of the European Union.

Treasury spokesperson Maciej Wewoir confirmed to Lloyd"s List that the unknown buyer had already postponed one payment deadline on July 21 and has now missed the new one on August 16. It has however made an earlier ?8m deposit.

He confirmed that the Qatari government was involved financially with the deal and was mulling over its options.

?We have had a letter through the ambassador of Qatar in Poland from the Qatar investment authority that it would look into the transaction and by the end of the month would decide whether to enter it.?

The treasury has been in touch with the private investor, but should the sale fail to go through the treasury has said it could begin the legal process to recover the money.

Calls said to be representing Polish Shipyards, the new entity created to facilitate the sale, and managed by Jan Ruud de Jonge, a representative of Stichting Particulier Fonds Greenrights, were neither answered or returned.

Mr Wewoir said Poland could also request a further extension on the privatisation deadline with the European Union"s commissioner for competition, Neelie Kroes, as it contemplates restarting the sale process again.

Ms Kroes has previously expressed her displeasure at the length of time the Polish government was taking in arranging the sale of the yards.

Sources in Poland have implied that the conditions of the sale could be to blame for the embarrassing situation. The government had been told by Brussels"s to simply sell off the assets to the highest bidder, with little done to ensure the bidder would complete the deal.

If the current offer from the unknown buyer fails to materialise and Ms Kroes does not give Poland a further extension to find a buyer, the treasury could be forced to close down the yards permanently according to Mr Wewoir.

Poland"s prime minister Donald Tusk has also said that should the sale fail, he could be forced to dismiss his treasury minister Aleksander Grad who has the responsibility of raising Zloty37bn through the sale of state run entities by the end of this year.

This news is a total 4462 time has been read