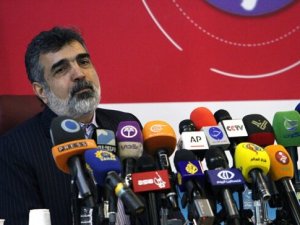 TEHRAN, Sep. 07 (MNA) – Iran officially started on Friday the third step in reducing its commitments to the 2015 nuclear deal, also known as the Joint Comprehensive Plan of Action, the spokesman of the Atomic Energy Organization of Iran (AEOI) said.

"Four measures were adopted today; one of them was related to the paragraph 39 [of the nuclear deal] and the centrifuge machines. The centrifuges increase our stockpile [of enriched uranium] in addition to helping the R&D activities,” Behrouz Kamalvandi told reporters on Saturday.

He said under the third step, the agency activated 20 IR-4 and 20 IR-6 centrifuges on Friday.

"We have injected gas into a 20-set cascade of IR6 centrifuges since yesterday and assembling the 30-set cascade is our next plan.”

The country, however, will allow the International Atomic Energy Agency (IAEA) to continue monitoring its nuclear program, he added.

According to the AEOI spokesman, four other measures, including launching the middle-cascade of IR2m which was due to be done in 2026 and injecting gas into a 10-set cascade of IR5s centrifuges, are still remaining which will be done within almost two months.

The measures were adopted after the Islamic Republic's announcement of further reduction in its commitments under the JCPOA.

"We took the first step in reducing our commitments, and gave the P4+1 a two-month deadline. Then we went ahead with the second phase, giving them another two-month deadline. In the four-month period, we held negotiations with the G4+1, including the European Union and the three European countries in particular," Rouhani said.

Iran is further scaling back its commitments under the JCPOA due to the inability of its three European signatories -- the UK, France and Germany -- to meet their end of the bargain.

Upon announcing his withdrawal from the JCPOA, US President Trump called it the "worst deal ever" and pledged to force Iran through sanctions into renegotiating a new agreement that addresses its ballistic missiles and regional influence.

The Trump administration has ever since targeted Iran's industry and oil exports with various sanctions in a bid to cripple its economy.

Wary of possible penalties, Europe has failed to deliver on its pledge to save mutual trade by enacting a special payment channel that protects European firms from US sanctions months after unveiling it in January.

Fed up with the foot-dragging, Iran announced the first stage of its countermeasures in May by increasing its enriched uranium stockpile to beyond the 300-kilogram cap set by the agreement.

The Islamic Republic took the second step two months later, when it started to enrich uranium to purity rates beyond the JCPOA limit of 3.76 percent.