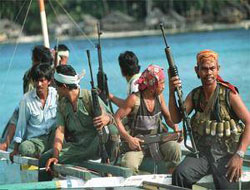 Iran's main shipping firm has told its vessels to install barbed wire on their decks and put crew on watch against pirates in the Gulf of Aden, it said on Wednesday.

Iran Deyanat had sailed to Salalah, Oman, after its release and was now in the Mediterranean

The bulk carrier Iran Deyanat, owned by Islamic Republic of Iran Shipping Lines (IRISL), was hijacked on Aug. 21, one of numerous ships hijacked by pirates in the waters off the Horn of Africa.

It was freed on Oct. 10. International shipping officials say the attacks are threatening trade near the entrance to the Red Sea, which is on a vital shipping route between Asia and Europe.

One report suggested the Iran Deyanat had been carrying arms to Eritrea, and a Kenyan-based shipping organization suggested the ship was carrying a "dangerous chemical" that had injured and killed Somali pirates.

IRISL denied both allegations in a statement on Wednesday. It said the Iran Deyanat had sailed to Salalah, Oman, after its release and was now in the Mediterranean, heading to Rotterdam. "The cargo was loaded in China under normal circumstances and there is no danger associated with it," IRISL said.

This news is a total 1939 time has been read