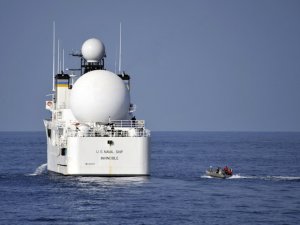 Multiple fast-attack vessels from the Iranian Revolutionary Guard Corps came close to a U.S. Navy ship in the Strait of Hormuz on Saturday, forcing it to change direction, a U.S. official told Reuters on Monday.

The official, speaking on condition of anonymity, said the boats came within 600 yards (meters) of the USNS Invincible, a tracking ship, and stopped. The Invincible and three ships from the British Royal Navy accompanying it had to change course.

The official said attempts were made to communicate over radio, but there was no response and the interaction was “unsafe and unprofessional.”

The IRGC could not immediately be reached for a comment.

Years of mutual animosity eased when Washington lifted sanctions on Tehran last year after a deal to curb Iran’s nuclear ambitions. But serious differences remain over Iran’s ballistic missile program and conflicts in Syria and Iraq.

While still a presidential candidate in September, Donald Trump vowed that any Iranian vessels that harassed the U.S. Navy in the Gulf would be “shot out of the water.”

Similar incidents happen occasionally, but the last serious one was in January when a U.S. Navy destroyer fired three warning shots at four Iranian fast-attack vessels near the Strait of Hormuz after they closed in at high speed and disregarded repeated requests to slow down. (Reporting by Idrees Ali Additional reporting by Bozorgmehr Sharafedin; Editing by James Dalgleish)

This news is a total 935 time has been read
Tags: Iran Fast-Attack Craft Approach USNS Invincible in Strait of Hormuz, Forcing Course Change