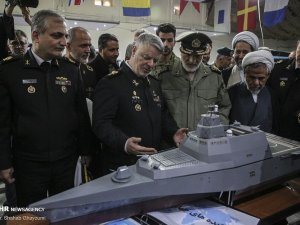 On November 30, 2019, the Iranian Navy has unveiled new military achievements produced locally including a new Trimaran warship design under the "Safineh" guided-missile destroyer project. According to our first analysis, the ship has a design similar to U.S. Navy Independence-class littoral combat ship.

According to a first technical review released on the Internet by Global Security, the ship has a displacement of 3,000 tons and a speed of 40+ knots. It is equipped with a 96-unit vertical launch system into the forward deck, 4 Kamand close defense systems, and a 57/76 mm main gun.

The warship also has a large deck with dual hangars, twice as big as a single-hull vessel of the same tonnage, and it can carry all types of helicopters operating in the Iranian Navy.

The helicopter deck of the Safineh-class guided-missile destroyer is very large compared to the various types of combat vessels in active service with the Iranian Navy. It uses a trimaran design and is propelled by a set of 4 water jets. Also, low hydrodynamic resistance in high speed and a floating propulsion system appropriate to the needed corresponding dimensions and speed are among other features of Safineh.

The Safineh-class is also equipped with Active Electronically Scanned Array (AESA) Radar. The AESA is a more advanced, sophisticated, second-generation of the original PESA phased array technology. PESAs can only emit a single beam of radio waves at a single frequency at a time. The AESA can radiate multiple beams of radio waves at multiple frequencies simultaneously. AESA radars can spread their signal emissions across a wider range of frequencies, which makes them more difficult to detect over background noise, allowing ships and aircraft to radiate powerful radar signals while still remaining stealthy.