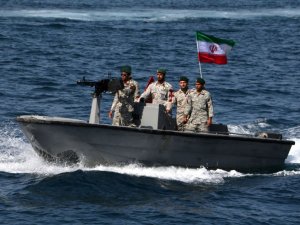 Earlier, Iranian President Hassan Rouhani promised that his country would propose a new initiative to ensure the security of the Persian Gulf and the Sea of Oman at this week's UN General Assembly in New York, with the plan calling for cooperation between

Iraq, Saudi Arabia, Bahrain, the United Arab Emirates, Qatar, Oman, Kuwait, and possibly Yemen," Zarif said, speaking to reporters at a wo"Initially, this security coalition in the Persian Gulf should include Iran, rking breakfast with journalists on the eve of the UN General Assembly.

According to Zarif, the coalition would act under the auspices of the United Nations.

The senior diplomat made the proposal as he set off to New York City for the United Nations' General Assembly on Monday to present Iran's plan for a 'Coalition of Hope' initiative in the Gulf, with the plan seeking to ensure regional security using local capabilities, while keeping outside powers including the United States, the UK and Israel out.

According to Zarif, Iran is not opposed to working with Russia on a concept of maritime security in the Persian Gulf. "When I attended the Valdai Forum, I proposed that Russia be involved in our concept," Zarif said. "Many aspects of our concepts correspond to one another," the foreign minister added.

Tensions between Iran and Saudi Arabia escalated to their highest levels in years last week following a sabotage attack on two major Saudi Aramco oil facilities, which temporarily crippled a substantial portion of Riyadh oil export capabilities. Yemen's Houthi militia claimed responsibility for the strikes, but the United States almost immediately blamed Iran. Riyadh has similarly alleged that its preliminary findings led it to suggest that the attacks were not launched from Yemen.

This news is a total 1706 time has been read
Tags: Iran, Iraq, Gulf States Should Join Coalition