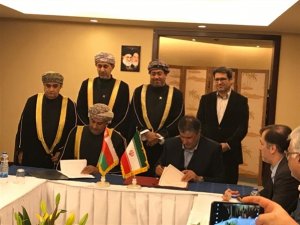 Iran, and Oman signed a maritime cooperation agreement on Sunday aiming for boosting maritime transportation between the two countries

The agreement was signed in a ceremony attended by senior officials from both sides including the Iranian Minister of Transport and Urban Development Mohammad Eslami and Oman’s Minister of Commerce and Industry Ali bin Masoud al Sunaidy, and heads of the two countries’ ports and maritime organizations.

Under the agreement, Iranian traders and businessmen interact constructively with their Omani counterparts, and regular shipping lines will be established between the two countries, while the two sides will also provide facilities for using each other’s ports, the official explained.

Masoud al Sunaidy also expressed satisfaction with the signing of the agreement, saying: “Once the agreement’s finalized copies are received, it will be implemented immediately.”

He further expressed hope that the signing of this agreement would encourage and stimulate an increase in the two countries’ trade turnover.

This news is a total 142 time has been read
Tags: Iran, Oman ink agreement on maritime transport cooperation