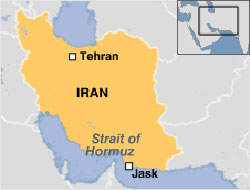 Iran has opened new naval facilities east of the Strait of Hormuz, the narrow entrance to the Gulf which is key to oil supplies, state media say.

Iran has opened new naval facilities east of the Strait of Hormuz, the narrow entrance to the Gulf which is key to oil supplies, state media say.

Naval chief Admiral Habibollah Sayyari was quoted as saying the base in the town of Jask would enable Iran to block the entry of an "enemy" into the Gulf.

Iran has threatened to close the strait in response to a potential military strike over its nuclear activities. It denies claims by Western powers that it is seeking a nuclear bomb.

"We are creating a new defence front in the region, thinking of a non-regional enemy," Adm Sayyari told state run Iranian radio.

"In this region we are capable of preventing the entry of any kind of enemy into the strategic Persian Gulf if need be," he said.

The Strait of Hormuz is "by far the world's most important chokepoint," according to the US government's Energy Information Administration.

About 20% of oil traded worldwide passes through the narrow waterway, the body says.

There has been speculation that the US or Israel might stage a military strike on Iranian nuclear facilities, in response to Iran's refusal to halt the enrichment of uranium, a process which can be used to make fuel for nuclear bombs.

Tensions remain high, although many analysts believe an attack has become less likely in recent months.