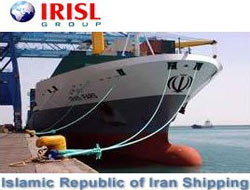 Iran plans to add 16 new cargo ships to its naval fleet by mid-March to increase a total capacity of 5.8 million deadweight tons.

Iran plans to add 16 new cargo ships to its naval fleet by mid-March to increase a total capacity of 5.8 million deadweight tons.

Managing Director of the Islamic Republic of Iran Shipping Lines (IRISL) Mohammed Hussein Dajmar says the number of cargo ships of the company has reached 154, from 138 during the year that ended March 20.

IRIB quoted Dajmar as saying that Iran ranks first in the Middle East in terms of the number of its commercial liners and oil tanker vessels, while it places 14th in the global ranking.

IRISL and its subsidiaries operate a fleet of 154 vessels with a total cargo capacity of 5.29 million tons, which transport a wide variety of goods along routes in Asia, Europe and Africa.

Noting that the company shipped 30.56 million tons of cargo during the past year, Dajmar added that IRISL anticipates shipping 50 percent of the country's cargo in the future up from the current 35 percent.

According to Mehr News Agency, the IRISL's revenues were more than $1.6 billion in 2007, reflecting a 54 percent year-to-year increase.

This news is a total 947 time has been read