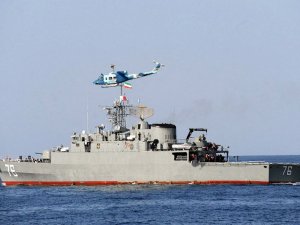 The commander of Iran's navy announced on Wednesday joint Iranian, Chinese and Russian naval exercises in the Indian Ocean as tensions rise with the United States and Arab Gulf countries. The Iranian Navy commander did not specify the exact date of the ma

In a press conference, Rear Admiral Hossein Khanzadi told reporters that the maritime branch of the Iranian military would be launching joint exercises alongside the Chinese and Russian navies, in the southern waters in the Indian ocean, and said another drill could take place before the end of the year.

The drills are organised in line with the recommendations of the Indian Ocean Naval Symposium (IONS). They carry the aim of increasing security in the southern Indian ocean, in coordination with permanent naval missions stationed there, according to its official statements.

"The preliminary plan of the military exercises was compiled last month. The participants are currently engaged in preparations before their launch," the Iranian Navy commander said.

Khanzadi stated the initial plans for these drills had been drafted and that all militaries were on standby but he did not specify the exact date of the manoeuvres.

Russian Foreign Minister Sergey Lavrov said on October 2 that during the upcoming exercises, Russia, China and Iran are intended to train anti-terrorism and anti-piracy efforts.

This news is a total 545 time has been read
Tags: Iran, Russia, China to hold joint naval drills in Indian Ocean soon