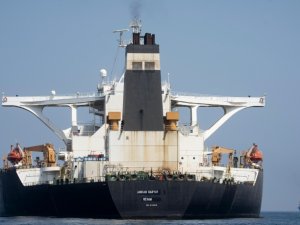 Iran says it has sold oil on a tanker near Syria’s coast to a private company in defiance of U.S. efforts to stop such a sale, fueling debate among observers about whether the ship has offloaded any crude.

Iran says it has sold oil on a tanker near Syria’s coast to a private company in defiance of U.S. efforts to stop such a sale, fueling debate among observers about whether the ship has offloaded any crude.

In a tweet posted Wednesday, Iranian Ambassador to Britain Hamid Baeidinejad said his nation’s tanker had sold its oil at sea to the unnamed private company “despite numerous American threats.”

U.S. ally Britain had seized the tanker July 4 under its former name of Grace 1 in the waters of the British territory of Gibraltar, on suspicion the tanker planned to deliver Iranian oil to Syria in violation of EU sanctions on the Syrian government of President Bashar al-Assad. Gibraltar allowed the tanker, under its new name of Adrian Darya 1, to leave its waters Aug. 18 after saying British authorities had received written assurances that Iran would not deliver the oil to Syria.

Iranian officials denied providing such assurances, and the Adrian Darya 1 sailed toward the Syrian coast before turning off its transponder Sept. 2. The Trump administration, which unilaterally banned all Iranian oil exports in May to pressure Tehran to stop perceived malign behaviors, appealed unsuccessfully to Britain not to release the tanker and later sanctioned the vessel Aug. 30.

30 people are talking about this

In his tweet, Baeidinejad said Iran believes EU sanctions “cannot be extended to third countries.” He posted his comments after being summoned a day earlier by British Foreign Minister Dominic Raab, who issued a statement condemning Iran for “breaching assurances” about the tanker. Raab said it was “clear … that the oil has been transferred to Syria and Assad’s murderous regime.”

A U.S. State Department spokeswoman backed up Britain’s accusation that Iran “reneged on its assurances” regarding the tanker in a Tuesday statement reported by Reuters.

In a Wednesday report, Iranian state news agency IRNA also quoted Iranian Ambassador Baeidinejad as saying the new private owner of the tanker’s 2.1 million barrels of oil will choose the destination of the crude, without elaborating.

Earlier, Iran’s semi-official Mehr News Agency had quoted foreign ministry spokesman Abbas Mousavi as telling state media Sunday that the tanker had “docked on the Mediterranean coast and unloaded its cargo,” without specifying the date or other details.

This news is a total 1009 time has been read
Tags: adrian darya, tankertracker