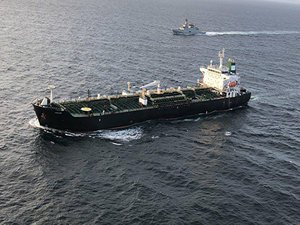 The medium-size vessels Forest and Fortune, carrying about 300,000 barrels of fuel each loaded at Iran’s Bandar Abbas terminal last month, are bound for Venezuela, according to sources with knowledge of the shipment.

Gasoline scarcity in Venezuela has worsened in recent days due to insufficient domestic production, leaving long lines of drivers waiting in front of stations and increasing the need for imported fuel, reported by Reuters. Iran sent the first flotilla of five fuel tankers to Venezuela between May and June to help its political ally, which is also under U.S. sanctions.

The vessels arrived in Venezuelan state-run PDVSA’s ports without interferences. But the second armada of four Liberia-flagged tankers owned by a Greek shipping group did not arrive at the South American nation in July as the fuel was seized by Washington under a court order.

The fuel is expected to be auctioned as part of the U.S. court action.

The Forest and Fortune have not officially changed their destinations. They continue sailing under the indication “for order” and estimated date of arrival later this month, the Eikon data showed.

A third Iranian tanker of the same size that also loaded fuel in August at Bandar Abbas, the Faxon, has kept its transponder switched off since it set sail, the data showed, making it difficult for tracking systems to detect its location.

That vessel is also bound for Venezuela, according to the sources, but the route it took is yet unknown.

Two separate sources said earlier this week that the three tankers communicated with the Suez Canal in early September to sail through the waterway, but they did not pass on the scheduled date.

This news is a total 2691 time has been read
Tags: Iranian fuel tankers round Africa en route to the Atlantic: data