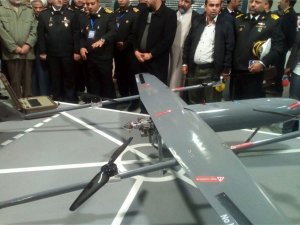 On November 30,2019,Iran’s Navy unveiled a vertical takeoff naval drone with the capability to fly horizontally and land on water, dubbed Pelican-2,on Saturday morning in a ceremony where a homegrown Inertial Navigation System (INS)was also put on display

One of the products was a vertical takeoff naval drone, dubbed Pelican-2, which is a sophisticated long-range drone equipped with four motors for vertical movement and a powerful propeller for horizontal movement. The drone can take off from the cruising warships for patrol and reconnaissance missions and this drone can even land and float on water in an emergency.

The Navy has employed Pelican-2 on naval fleets in international waters.

On Thursday, Chief of Staff of the Iranian Armed Forces Major General Mohammad Hossein Baqeri underlined the important role played by the country's Naval forces in the establishment of security and stability in the Persian Gulf.

This news is a total 584 time has been read
Tags: Iranian Navy unveils its new Pelican-2 vertical takeoff naval drone