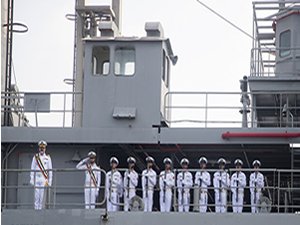 Iran’s Navy has different dimensions, he said, adding, “Not only the Navy has military responsibility but also it maintains the economic dimension of the country along with military operations.”

Speaking on the occasion of the 40th anniversary of Sacred Defense, marking the eight years of Iraqi Imposed War against Iran in 1980-1988, Sayyari pointed to more than 1,000 costly and expensive missiles used by Iraqis used to prevent Iran’s oil export and said, “Only 200 of these 1,000 missiles were hit.

Meanwhile, in these 8 years, we accompanied 10,000 ships from Khark Island to Bandar Imam Khomeini (RA) and managed to save 180 ships out of these 200 ships that were hit.

This trend is exemplary in world wars and this success is very important as well.” He further pointed out that the Navy has different dimensions.

Not only it is responsible for undergoing military operations, but also it maintains the economy of the country simultaneously, Then he pointed to the high capacity and potential of country in manufacturing naval parts and equipment and added, “In the beginning,Western advisers thought that we would no longer be able to use and manufacture missile launchers but the miracle of Islamic Revolution caused us to be self-sufficient in the field of manufacturing relevant parts and equipment.”