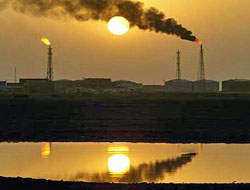 As OPEC decides to catch falling oil prices by cutting supply, Iraq Oil Minister Hussain al-Shahristani says anything below US$80 per barrel will be a hit on next year?s budget.

As OPEC decides to catch falling oil prices by cutting supply, Iraq Oil Minister Hussain al-Shahristani says anything below US$80 per barrel will be a hit on next year"s budget.

Iraq is not bound by OPEC quotas because of ongoing wars and sanctions that hampered development of the oil sector. Its top priority now, however, is stopping the month on month decline in production and exports, which began this fall after record post-2003 output.

The return of international oil companies to Iraq continues to reignite an old debate in the country. Politicians had objected to the presence of foreign firms and the rights they demand through the numerous accusations they had directed at previous governments on this matter, veteran Iraq reporter Walid Khadduri writes in Al-Hayat this week.

With time, the issue became worse and more complicated, subjecting the country's entire oil policy to accusations which have obstructed the development of this sector in comparison to what neighbouring nations have accomplished.

Although the issue is still limited to general principles, new developments can be cited, including the role of oil in the invasion of Iraq in 2003, the possibility of adopting an independent oil policy that takes into consideration the interests of Iraq while it remains under occupation, and the issue of transparency during negotiations at a time when corruption prevails on the national level.

Iraq's Presidency Council agreed a law aimed at oil and petrol smugglers, reported. Little about this has been released, perhaps overshadowed by Status of Forces Agreement (SOFA) disputes. It's likely the same law reported by UPI's Ben Lando in April as having received a first reading in Parliament.

In other news from Iraq, the bi-lateral deal to keep US forces in Iraq has hit some snags after Iraqi public and political opposition surfaced. The details of it, currently, are not known and certainly evolving, but the American Friends Service Committee translated the latest Status Of Forces Agreement, which can be found online.

The SOFA would replace the existing UN resolution allowing US occupation of Iraq, which expires on 31 December. It has been given one-year extensions the past few years and Alissa Rubin and Katherine Zoepf report for the New York Times another extension has been backed by UN Security Council member Russia. The article has a good breakdown of opposition and proponents of the SOFA.

This news is a total 811 time has been read