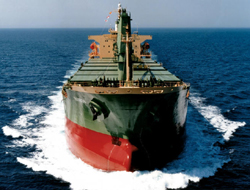 Iraq appears to have lined up its first major commercial shipping initiative since the toppling of Saddam Hussein by teaming up with Greece?s Restis.

Iraq appears to have lined up its first major commercial shipping initiative since the toppling of Saddam Hussein by teaming up with Greece"s Restis.

Iraq appears to have lined up its first major commercial shipping initiative since the toppling of Saddam Hussein by teaming up with Greece"s Restis family shipping group for transporting dry cargo to the country.

Although details are scant, shipowner Victor Restis and Iraqi Minister of Transportation Amer Abdul-Jabbar Ismail both confirmed the intention to sign a vessel operating accord during a visit by the latter to Athens.

Baghdad"s own figures show that currently 20m tonnes of dry cargo is being imported annually, but this amount is expected to dramatically increase with the country entering ?a period of infrastructural rebuilding?, according to the minister.

Sources close to the negotiations disclosed that the blueprint for the deal was a 50/50 joint venture that would charter in tonnage to meet Iraq"s import needs.

There will not be exclusivity as such, although Mr Abdul-Jabbar said that ships could be brought in from the open market when the venture"s needs could not be satisfied by the Restis controlled fleet.

It is likely, however, that the venture will charter in bulkers from the beginning as the Restis group already does through several commercial operating joint ventures.

Apart from the Greek group"s own substantial dry bulk fleet, it has a key stake in two US-listed bulk shipping companies ? Seanergy and FreeSeas ? which could also be invited to contribute tonnage. But the venture will seek competitive market rates that will automatically open the door to other owners.

Observers say that while rebuilding and developing Iraq will doubtless require huge shipments of raw materials in future, grain is likely to be the key commodity to be handled by the joint venture in the short term.

Given port restrictions, the focus will be mainly on handysize vessels up to shallow draft panamaxes, although in the future capesizes could be included.

The Iraqi government is looking at a number of port development projects, said Mr Abdul-Jabbar, with one study projecting the creation of a huge new port with capacity for 48m tonnes annually and eventually for 78m tonnes.

In recent weeks the transportation ministry has specifically invited a number of European business communities to invest in virtually all modes of transport in Iraq.

The minister upped the ante in Athens, suggesting that investors would have to be quick to maximise the opportunities Iraq was offering. ?Whoever invests today will have the advantage over someone who invests tomorrow,? he said, adding that ?tomorrow is better than the day after tomorrow?.

Iraqi Airways has just reactivated a service to Athens, two decades after its planes were grounded under the international embargo triggered by Saddam"s invasion of Kuwait.

?We are honoured to be working with Iraq,? Mr Restis said. ?Beyond the numbers, what is important is that there is an invitation to Greek business people to invest in Iraq.?

He said the need for port infrastructure should interest major Greek construction companies, some of which could trace port building activities in the Middle East back to the 1960s and 1970s.

It is the second partnership that has been announced between the Greek group and a Middle Eastern government in the last few weeks.

In February Mr Restis inked an agreement with Abu Dhabi"s state-owned International Petroleum Investment Company for an investment joint venture focused on shipping, energy and transport with the creation of a new tanker fleet for the emirate as a priority.

This news is a total 8496 time has been read