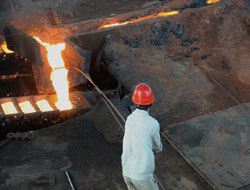 Capesize freight derivatives have staged a much-anticipated revival, with the value of forward freight agreements for the first quarter of 2009 jumping by up to 30% in just one week, albeit from a low base.

The re-emergence of trading interest in FFAs resulted from renewed chartering activity from Australia"s iron ore producers. A steady stream of fixtures from mining companies to transport iron ore from Western Australia to China pushed up capesize rates from their record lows.

?This revival in the cape market is purely driven by iron ore on the Western Australian route, along with rumours of a little fronthaul activity, which haven"t been substantiated,? said a London-based derivatives broker.

Volatility has also seen the return of FFAs being bought and sold within a day. Day trading has been virtually dormant during December, as rates have hovered at low levels, with little intra-day variation.

But rising rates have now breathed new life into freight derivatives, with reports that last week"s trading volumes had picked up. Earlier this month traders experienced the lowest levels of liquidity seen in 2008. Overall, liquidity has risen by 22% in 2008, and is forecast to be unaffected by market weakness, according to Freight Investor Services.

But physical rates have now risen above operating costs, which could put a dampner on further volatility. Higher chartering rates are expected to entice major owner-operators back to the market, and hence cap any rapid increases in rates as available tonnage swells.

As much as 25% of the global fleet of about 8,000 capesize bulk carriers is currently estimated to be unemployed, with owners unwilling to accept rates below around $6,000, the estimated daily operating cost for that ship type.

It now costs around $5.50 per tonne to transport iron ore from Western Australia to China, a rate that represents more than $10,000 per day for a capesize vessel.

Paper has also picked up for the panamax sector but lacked the dramatic boost seen for capesize vessels. FFA rates for the first quarter of 2009 closed on Friday at around $9,750 per day, compared to around $9,100 a week earlier. Cal 09 contracts were trading at $12,750, compared to $11,500 a week ago.

There are also some outstanding settlements for over-the-counter FFA contracts to be paid for November, according to brokers, who were reluctant to provide further details. Payments were due by December 7 and tolerance towards late payers is wearing thin. Many traders who wrongly bet on a rates rebound in the last quarter of 2008 face serious losses following the market crash in September.

This news is a total 1117 time has been read